Finally got the log book back and I have an email confirming that the dealers will re-imburse me for a new rear number plate so that's a job later this week. I happened to go to Halfords a few days ago and noticed they were fitting number plates for someone, so I went and had a chat with the Halfords guy: The logo is very small as someone else said earlier this thread. Funny thing was the old plates being changed were from the same dealer as mine...I wonder if they were as wonky before they came off.

I've hardly driven the car lately: We found it so handy having my son's Fiesta to use for local/shopping trips (to protect the C200 from car park dents) that I decided to buy a cheap car for us to use now that he has passed his test and is using the Fiesta to go to work. It keeps my no claims going too as the C200 is on my wife's insurance which I'm named on. Our son put us on his Fiesta insurance as it made it cheaper and means we could borrow it if need be.

I picked up a cheap 09 plate Ford Ka with a few scuffs and a slight dent in the rear wing for peanuts; it's £30 a year to tax, cost £10 to swap my insurance over from the Fiesta (now my son has insured it) and does over 55pmg. I even managed to re-gas the air con and get it working again, though a few days too late for the record breaking weather last week. My son can drive it (third party) on his Fiesta insurance too, so it's a back up car for us all.

Gave the C200 a quick wash ready for a trip out to the coast tomorrow. Surprising how dusty and covered in insect poo that it gets just sat on the drive. Looking forward to a run in it after a week of local trips in the Ka.

The good thing about the Ka is that I can fit all my band gear in the boot, so I won't worry about parking the C200 out the back of some pub and if it gets the odd mark on it. Fender Stratocaster, Marshall amp, pedalboard, mic stand and a gig bag full of cables...just about fits in there: 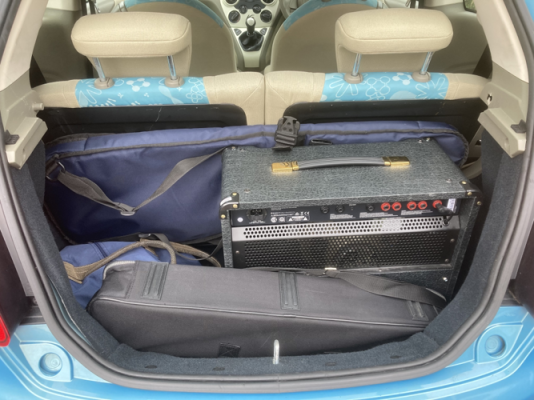 I plan to do the gearbox oil/filter change on the C200 next month, though hoping to actually start on my retirement project RS2000 now the three road cars are pretty much up to scratch.
Last edited: Jul 26, 2022
You must log in or register to reply here.

MGB 77, gets a Paint correction and exterior detail,

How to remove interior ‘crayon’ smell