So the oldies rule on this site then, over 600 views.

(1) A Clip on parking light. Manufactured by I think by Rayot it was clipped on to the top of the drivers wind up window & had a red lens to the rear & white lens to the front, had a single bulb and cable trailed down to a fag lighter or crocodile clips on the battery

(2) Windscreen washer kit. In the early seventies when screen washers became a requirement, we bought these kits which consisted of a polythene bag, a length of plastic pipe various elbows & tee pieces, two jets for DIY positioning on the bonnet & a pushy pump thing for the dash
board.

(3) Bolt on Lucas fog light. Again in the seventies when they became a requirement these bought for self fitting under the back bumper and the kit included cable, scotchlok connector & switch for the dash board.

(7) Plastic fingers that stuck out from under the boot lid

What else can you recall

I think it was Raydyot
Coloured lacquer to paint on your bumpers to stop them going rusty
'Goggle' eyes
The plastic black girl that hung from your mirror and winked at you.
Stickers that said stupid things like "see you later overtaker, in a casket crazy basket'
Windscreen 'peaks'

lewyboy said:
Stick-on keyholes to suggest an alarm was fitted.
Click to expand...

That's all we had before they invented flashing led's ……….
A

Best one I saw was on a Del Boy type Reliant Robin with occupants:

Years ago, I had "vacant - apply within" on the passenger side of the visor

I had to have 2 visors, one below the other, to fit the lettering……

Bullet hole transfers on the windows...

Stick-on heater elements for the rear screen ... fitted one of those to my Viva.
L

Nodding donkeys always made me smile and sheepskin seat covers with wooden beads. 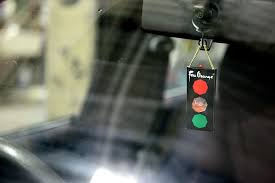 CB ariel (yes guilty folks) that was massive. It was attached to the boot of my mini and clipped the the roof gutter by the drivers window. Whatever happened to roof gutters. Oh and roof racks that fixed onto said roof gutters.

Fitted one of those to my Mk1 Golf, it never worked properly other than to give false alarms and eventually the car was nicked with it fully armed and no one heard a thing

Location
Advocatus Diaboli in a Rest Home for the Terminall

I did have sticker on an old car (can't remember which one) that said " Mafia Staff Car.. You Toucha Mya Cara I breaka youra face"

I had it parked up near Harrods, middle 1970s & was met by a middle aged Italian American Matron type who berated me for disrespecting & laughing at Italian Americans. A surreal moment, was she connected ?
E

4 huge Lucas spotlights on the front of my 850 Mini , Monte Carlo Rally style.
An equally large spotlight on the boot lid as a reversing lamp and also to blind anyone who came too close
Rear window wiper operated by a handle and cables fixed to the drivers door frame
Seat brackets so that the drivers seat touched the backseat - fantastic leg room if you could still reach the pedals.
Cranked extension to the gear lever so that you could still change gear whilst sitting so far back.
Bracket to lower the steering column so that the 6 inch diameter steering wheel nestled nicely in the crutch.
Spacers for the reverse rim wide wheels that wore the bearings out in no time.
Totally cool was I at 18!
You must log in or register to reply here.

Thanks for letting me in. Looking for a service schedule for a C200 W203 Elegance estate & other questions.

G
FOR SALE: H7 LED Bulbs and custom wiring with OEM back covers