Hey guys, Brand new to the Forum and it's been a great help. I'm starting this thread to consolidate some information for people in the future as well as now.

After driving back from work I had the Engine Management Light come on where the heating also stopped working correctly (was only hot over 24 degrees, cold under, didn't really change with the thermostat). Shortly after the AdBlue warning light came on, and started counting down telling me the engine would not start in 500 miles. 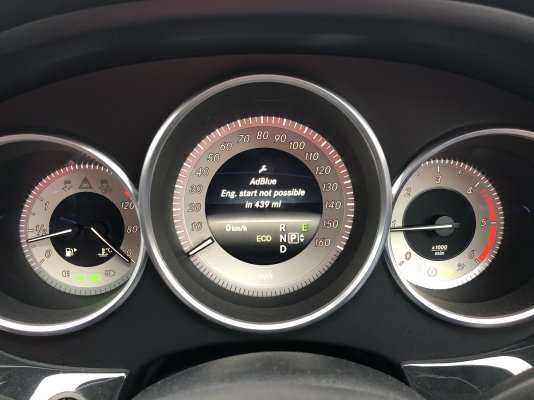 I'm going to try and get it booked in for diagnostic on Monday coming but from another thread and a few other forums where they've found this problem, the outcomes vary a lot.

1) It's just a clean of the AdBlue injector.
2) It's the entire AdBlue System, Injectors Tank and a Software update.
3) It's the NOX sensors (both) which require replacing costing me nearly £2000, but on two occasions they were replaced as a goodwill gesture because the car came under the Recall and software update due to the emissions scandal Mercedes were involved in.

Has anyone who's gone through this still got access to their codes and the outcome? even if it's just the AdBlue and EML scenario, the Heater fault doesn't seem to pop up on any of these situations. It's a pain as the warranty ran out the day beforehand but the cost could be the same as the warranty which seems pointless.

Thanks for any help in advance. I'll update as I go along.
OP
OP
T

A link to one of the scenarios;

C220 W205 - Adblue warning + Check Engine Light.Car is fine, only needed a reset due to the low adblue warning. What I know: - Adblue was never low Need help how to solve this thing out

A phone call this morning was full of good news. The faulty part turned out to be the NOX sensor, and as per the Scenario above it was replaced under warranty even though mine had run out. So by the looks of it, they're repairing any of the faults that occur due to the software that causes premature failures, even if you've had the software update.

If they give me a repair sheet with the fault codes I'll post them on here later. Fair play to MB, they could of just bounced a £1500 invoice my way with the website saying my cars been repaired under recall.
Z

Well thats good news,looking at the first picture I did not think you have too much of a problem you would have run out of fuel before you got to 439 miles
You must log in or register to reply here.

Jun 22, 2021
Cornerfarm
C
M
ADBLUE any difference and when to fill it