I hope this is in the right place and is not too irritating.

I am looking to replace a white goods lease vehicle with an E class estate. It has to be an E class because my wife and I have two dogs, and it has to be petrol because I won’t be doing many miles.

I have a budget of approximately £5000. I’ve seen a few E500s online - pistonheads, autotrader etc that fit well within budget, so I think it is viable. As I will be coming into this a complete MB novice I’d welcome any suggestions and advice.

Our contract hire car goes back in October but I am able to buy its replacement immediately. I have been recommended an excellent local specialist for servicing (I also work in the motor trade which helps).

My friends on pistonheads advised against a BMW E61 and pointed me in this direction.

Thanks in advance, and apologies again for a dreadful “noob” first post.
E

The S211 (S=estate; W211 for a saloon) E500 in your price range has a bombproof engine, the seven-speed gearbox is pretty reliable too, but if it has full Airmatic suspension (I think all the V8s did, and if so it will have) that will give trouble sooner or later and is quite expensive to fix. The SBC (brake-by-wire) unit - it doesn't have a servo - is also quite expensive to replace if it needs it; they rarely fail, but after a certain number of brake applications (equates to about 100K miles, give or take) you either have to fit a replacement or have the applications counter reset. Many owners have had it reset once, but I'd not risk that a second time.

The E500 will very comfortably hold two Old English Sheepdogs in the load area with room to spare, though two Great Danes might be near the limit.

I've had lots of S211s, including the E55K (twice), and for my money the E500 (had two of those, too) is the best-balanced of the entire range; effortless and relaxing to drive, but can pick up its skirts and run a bit when you want it to. You'll get about 26 mpg on a long motorway run cruising at, er, 'up to' 85; I can't say what you'll get cruising at the legal limit... In mixed driving, around 18-20 mpg or so is more likely.

If you don't need the extra performance, a 350 petrol (V6) would also fit the bill, but they're rare, and engines within a certain range of engine numbers had camshaft tensioner problems and are best avoided unless they have been sorted.

Bear in mind that it was quite an expensive car when new, and old expensive cars still have expensive car running costs. It's a Mercedes, so parts aren't going to be at Ford prices.

If you find one you fancy, post it on here and we'll tear it to bits for you...
OP
OP
S

we have money set aside for maintenance and I’m keen on preventative measures so fingers crossed I can get one now I’ve decided!

Rest assured I will post on here when I get one.
E

I meant post on here (so we can look at the ad) before you buy it. Somebody might well spot something you've missed.

Not many about at the moment! There’s a left hooker, and an LPG converted one which suggests problems to me. I will have to patient and now I’ve made my mind up, act quickly when they crop up.
OP
OP
S

I have one! Bought under budget last Monday. It’s a 2005 E500 estate. It has covered a princely 196000 miles. The work required is actually what I expected, and whilst it clearly isn’t a perfect specimen I feel confident it won’t take a huge amount to get it into more than decent nick.

It will require new discs and pads, track rod ends and new brake hoses to start with, but I’m going to put a new set of tyres on, and then attend to other niggling little issues. 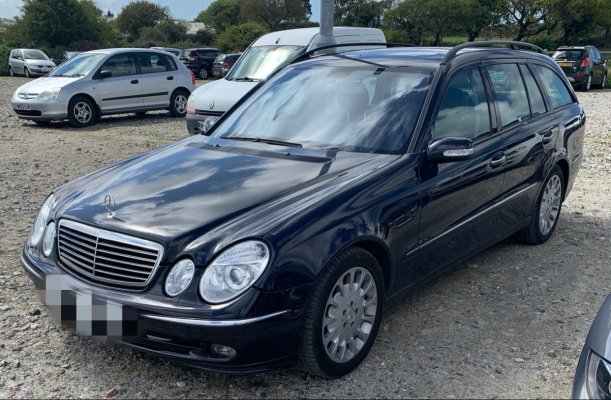 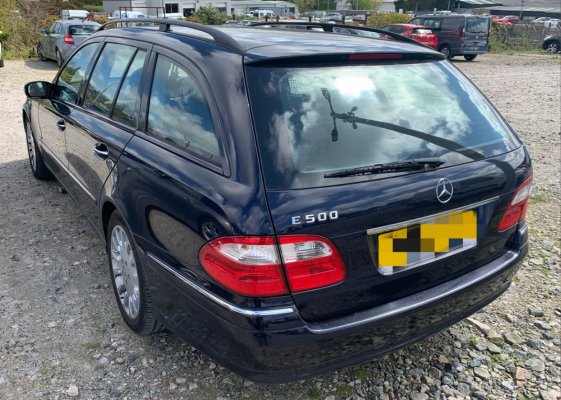 The next stage is to sort the brakes out. Going to replace discs and pads at the front, brake hoses, and track rod ends. If I get a chance I’ll take some photos of that as it’s happening, but not being mechanical, it may not happen.

It needs a fair bit of work doing to it, but we’ve budgeted for it and I have found out I work with a guy who used to be a service adviser at a Mercedes main dealer, so he’s seen it all before.

I’m looking forward to this as a long term project.

Nice one Simon, shame the bloke you know is not an ex master mechanic from MB as apposed to an ex service advisor. But I am sure it will work out fine

Petrol Pete said:
Nice one Simon, shame the bloke you know is not an ex master mechanic from MB as apposed to an ex service advisor. But I am sure it will work out fine

Ha! Yes that would have been extremely fortuitous. He is a mechanic so who knows? Going to get started tomorrow I think. I’m a little torn between the Uniroyal Rainsport 5s and Michelin Pilot Sport 4s.

The sun is out today so I will give the car a clean and wash and hopefully get some photos.
OP
OP
S

Interesting drive this morning. On my way to St Agnes (for the purpose of walking my deranged lurcher) the car didn’t want to change gear. I pulled over, turned it off and back on, and it was fine.

I wonder if this was the cause of the “malfunction” alert that came on on my way back home. There’s no indication of what it relates too, which I guess is standard, if a little frustrating. It only advises me to get to a workshop. Advice (more advice) will be appreciated.

Also there is a motor sound that recurs, sporadically. Doesn’t seem to have any rhyme or reason to it. I’m tempted to say it feels like something to do with steering or ventilation, although both of these seem fine.

To quote any character in more than one Stars Wars film, “I have a bad feeling about this”.

Incidentally, I’ve not had any work done yet. Hoping to start tomorrow, or the end of this week.

Hi, I would certainly check or even change the gearbox, (atf), oil, filter and put a new seal on.
The other motor that cuts in sporadically is possibly the SBC braking system charging itself back up.
OP
OP
S

If the car occasionally hangs on to first gear, use the Tiptronic to change up; it should be fine after that. This seems to be a characteristic of the early seven-speeds with high mileage; I've had several that did it. Apart from that, their gearboxes were fine.

The M113 engine you have is pretty well bulletproof; if the 'motor sound' you hear is a buzzing that lasts for only a few seconds, that is very likely to be the SBC unit re-pressurising itself.

W211s very often suffer from little electrical niggles, and if you're going to do much work on the car, you might care to invest in a decent Mercedes-optimised code reader. I have an iCarsoft MB II, and it's excellent, or for a bit more cash, an iCarsoft MB V2 is a bit more capable.
Last edited: May 19, 2021
OP
OP
S

Brilliant, thank you. I’ll invest in one of those because even though this is going to be way more work than any car I’ve ever owned previously, I’m actually quite interested in learning more about it.

My mechanic father may yet have grounds to be proud of my mechanical prowess, even though it’s not yet manifested itself....
E

Though changing the gearbox oil filter is child's play - just drain out what you can, drop the sump, replace the filter, replace the sump (and don't over-torque the retaining bolts/nuts [can't remember which]) - you can't drain the torque converter that way; there's no converter drain plug on the seven-speeds, and it needs to be pumped out. There are videos on Youtube to show how you can d-i-y it, or see what an indie will charge to do the job; about £250 all-in, I'd expect.

If your nearest indie is hours away and you really, really want to do it yourself/can't afford the time, but don't want the hassle of doing a full change, there is a bodge... Drain what you can (about 4 litres, istr), replace the filter and sump, put in the exact amount you drained out, take a little drive, then drain and refill again. Istr there's about 7 litres in the box, so after the first drain and refill you will have better than 57% fresh fluid in there, and after the second better than 85%. Good enough for guv'mint work...
You must log in or register to reply here.