OK the pub discussion from last night. One of the guys is buying a coupe, budget is £4k - £5k so what would be the most reliable for his money. He has looked at the usual German marques BMW 3 series, MB CLK, Audi TT for these and his budget he is looking at a 2004 model year at best. Then someone threw in the curved ball of the Peugeot 407 coupe apparently £3k-£4k buys you a 2008 model and the same money can also put you in the last of the Toyota Celica's also 2008.

So what would you buy and why anyone ever run any of these?

I'd imagine the most reliable for his money is the Celica. As for the 407...life is too short.
M

No mention of the Volvo C30? Or the Hyundai Coupe? Or the C-Class Sports Coupe?

Why buy young? A good CE is a nice looking thing of quality.
OP
OP

Giantvanman said:
No mention of the Volvo C30? Or the Hyundai Coupe? Or the C-Class Sports Coupe?
Click to expand...

C30 although a fantastic car and we loved ours is really a 3 door hatch.

The only thing you can say about the Hyundai is it's reliable, well appointed too from what I recall. The Celica would it eat for breakfast when it comes to handling and overall enjoyment, even the 140bhp version was a cracking drive.

] with the following caveat

All steel panels were galvanised from Quarter 2 2003 production onwards.
During the previous six months (Q4 2002 + Q1 2003) the process was
gradually introduced on the production line and therefore some vehicles
were galvanised during this lead-up period, but not all.

Toyota Celica--- mechanically reliable but practically only a 2 seater and you don't really see many about for some reason??
Last edited: Mar 12, 2015

Celica every time! I had a 2002 140hp which was a hoot! Held the road like on rails and was plenty quick enough for "normal" driving and pretty exciting when revved hard! Mine had 93,000 miles and never gave a moments trouble. Lovely little car, and, carried two mountain bikes in the boot! What's not to like!

That was my first thought too, those cars were bombproof but I think they only went to 2001 or maybe 2002 and he thought that was too old.

Nooo go way later that that with the 2521 T5 Engine

I couldn't imagine owning a coupe and it not being rear wheel drive, so I'd go with the CLK or the BMW.
OP
OP

Ah thats a convertible coupe, not a straight forward coupe, good call though I'd completely forgot about that one. Only issue is its built on the S40 platform so the driving dynamics are a bit compromised for a big car and with a T5 lump in the engine out performs the chassis without a bit of suspension work

Brera GT V6. Something different. Ok not the most reliable but the best looking by far. Plus they sound amazing, even better with certain aftermarket Italian exhaust. 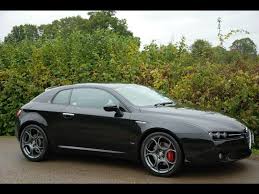 Brera GT V6. Something different. Ok not the most reliable but the best looking by far. Plus they sound amazing, even better with certain aftermarket Italian exhaust.

Funny you should mention that we did chat about the Alfa Brera and the GT both great coupes, but there is a perception they are brutally unreliable but is this true or an urban myth. Not in the same league I know but a mate of mine ran an Alfa 156 for 150k with no issues then ran a 159 to 120k again with no issues

Anyone any direct experience of the Alfa Brera or GT?

No experience here, but a friend has had a Brera for years with lots of use but no issues other than maintenance.

I went for the Audi TT. Nice looking, quirky and a future classic. 5k buys a really nice coupé but I would take the convertible.
You must log in or register to reply here.