MikeInWimbledon said:
You asked a joke question, you got a history lesson as a reply, young bobby.

One hundred years ago, the AA opened the first "petrol station" in Aldermaston, wherever that is, and things moved on from there.
Buses no longer needed to feed and water their animals on the end of each bus route. Manure disappeared off the streets.
The tech changes - things move on.

Your belief that vehicles can only be recharged by running a cable out of your flat front door, down five flights of stairs and out to the street is "silly."

We will pick up power where we park.

Think about how power generation has moved on in just the last five decades. We've moved from coal to nuclear, North Sea gas, to solar and wind. I agree Mike but we didn’t have 30 million cars on the road. I think the scale and expense of providing enough charging to replace all ICE is underestimated by most. 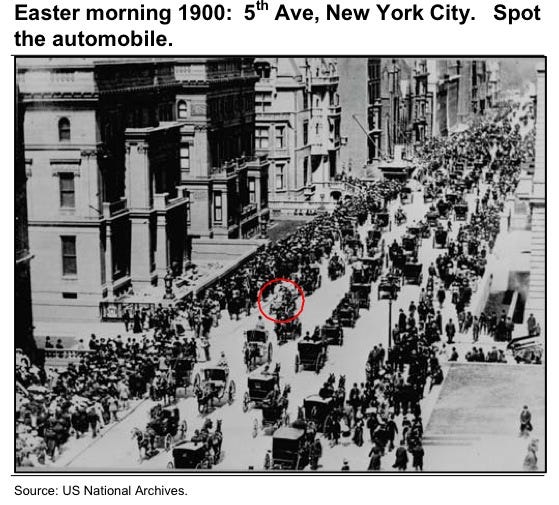 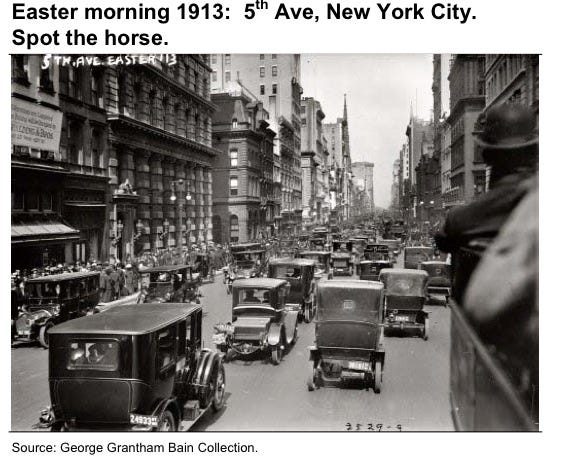 With recent developments in EV vehicles we tend to forget their original purpose-----to markedly reduce urban air pollution--- sure , its merely moving the carbon emissions/pollution elsewhere--- but in urban air quality improvement they can,t be beaten--yet!

Bobby Dazzler said:
Car parks, place of work, service stations, etc. Refueling an EV requires a different mindset to refuelling an ICE, little and often rather than run to empty and then fill to full.
Click to expand...

That's fine for short journeys with breaks between.

However a longer journey involves factoring in charging. This is where other forms of transport may start compete better with private vehicles.

At the moment I often choose to use a hire car for journeys that many would assume train or plane are better for - but I find door to door times and a suitable hire car to be cost and time effective. Add in an extra hour to two hours for charging on longer journeys and the car becomes considerably less attractive in door to door terms.

grober said:
but in urban air quality improvement they can,t be beaten--yet!
Click to expand...

Private EVs are a symbolic solution.

Commercial EVs are the tangible solution.

I'm quite prepared to accept that a double deck bus weighing maybe 10 tonnes unladen but with 70 passengers is better for the environment. I am less prepared to accept that the same bus used out of rush hour with half a dozen passengers and retarding the progress of other more efficient ICE vehicles is better in any way for the environment. I don't see EVs improving this situation much except that they are more efficient when their progress is impeded by amost empty buses.

And EVs cannot be beaten ? .... well cycles and e-bikes are presumably even better for the environment .... so I think they can be beaten already.

Spider10 said:
There's 1 thing i don't understand (i might be daft) how can you possibly charge your EV if you park on the street as most do?

an extention lead out the front window?
Click to expand...

Fairly long extension lead if you live on the 19th floor of a high rise.

chic0821 said:
Fairly long extension lead if you live on the 19th floor of a high rise.

Otherwise known as Tongue in Tooth charging.
OP
OP
B

Hi , in reality no such thing as a carbon neutral product.

chic0821 said:
"There is definitely enough energy and the grid can cope easily,”
Of course he is going to say that, its his job. A few years ago I think it was Mr Blair who said we should all be driving diesels, less polluting blah, blah. Aye right, now they are the devils soup. Each to their own, but personally speaking the only change to my fleet is the Diesel Range Rover Sport will be changed to a Full size Range Rover AB 5.0 litre petrol.
Click to expand...

Never, ever believe ANYTHING that any government encourages you to do, there is always a “hidden” agenda, “you must all buy diesels” is a perfect example. Wonder how long it will be before the government declares its plan to recover all the fuel duty that will be lost when many are railroaded into going “green”?

I am wildly sceptical about most of the crap that is spouted about how environmentally friendly the grossly overpriced scalextric cars are. When all the factors surrounding their manufacture and charging is taken into account, they barely stack up.

Thank god that I will never have to buy or drive one of these awful, overpriced golf carts.

Martinjs said:
Never, ever believe ANYTHING that any government encourages you to do, there is always a “hidden” agenda,
Click to expand...

I wouldn't put it as strongly as that but one thing I feel sure of is the governments net zero agenda is overall a shot from the hip and certainly hasn't been costed. A net zero target is all very laudable but you don't need two guesses to figure out who is going to pay for it. It's an unfortunate aspect of the current government that Boris isn't really a conservative in the usual sense, he likes to make big gestures without worrying too much about what it will cost. I was shot down in flames last time I mentioned the fact that the UK is responsible for only 1.1% of global emissions. That's not to say we do nothing, only that we keep some sense of perspective and not try to do something that can't be done without wrecking peoples lives and the economy in the process.

Amazon were running a fleet of merc EV vans around my area. For the last three weeks I haven't seen sight of any of them. One did break down and blocked a car park for quite a long time. I guess its battery went flat.

I wonder if they have given up on them or are trying something else? For now all I have seen its old vans and people in their own cars doing the deliveries?
M

I wont say anything just watch on youtube, Planet of the Humans. its about renewable energy con, I need say no more.
T

Renewable energy, I like it, now all our energy prices are going up as the bills come in for the hundreds of windmills and solar farms, nobody mentioned we would have to actually "pay for them" Thanks Extinction rebellion!
You must log in or register to reply here.