So, after a two-year absence, The Borders Book Festival returned to Melrose for four days.

We went along yesterday to listen to a little old Scotsman (5ft 5ins – 83yo) reminisce about his life and times.

Sir Jackie Stewart, Scots Icon and Motorsport Legend, is a guy of contradictions. Modest and self-effacing, he was relaxed and “ordinary” in the company of a marquee full of fellow countrymen, yet his charisma and presence filled the space far more than expected for some wee guy.

The audience was spellbound as he trotted out the anecdotes and quips – no doubt for the thousandth time – with the ease and hesitant couthiness of the genial old geezer he is.

Despite being dyslexic and unable to read and write, he told of how he rose to success, unashamedly cultivating and keeping in with the “right people” spotting opportunities, and being an early adopter of commercialism in F1. He claimed he was the first F1 diver to spray champagne on the podium (although others cite Dan Gurney). It led to the long and fruitful relationship with Moet.

It is also true that the left sleeves of his shirts and jackets are tailored short to ensure his Rolex is always visible. (My £6k effort looks like Mickey Mouse by comparison!)

Jackie covered in detail his mission to improve safety, relating the complete lack of marshals, medical assistance, or ambulances following his ’66 crash at Spa. For the millionth time, he told how he was rescued by Graham Hill who stripped him naked of his gasoline-soaked clothing.

“Graham was an expert at removing clothing – particularly off ladies.” (pause) “I rather enjoyed it!”

Jackie noted he was still alive today (and never spilt blood) and credits – amongst others – Ken Tyrrell. He compared Tyrrell to Colin Chapman. The former was a proper engineer whilst the latter was a fly man who thought nothing of putting in some crummy bit from a Triumph Herald – so long as the Lotus went faster.

Stewart lost no fewer the 57 close friends over the years. More deaths were in Lotus than any other make.

He would not be drawn into a comparison between Hamilton and Verstappen – his preference being Fangio!

His wife Helen has dementia and his efforts are concentrated on his charity Race against Dementia. He makes no secret of his wealth and how he came by it – it allows him to employ eight full-time nurses to give his wife 24-hour care.

Following his talk, Jackie was generous with his time, chatting, shaking hands and posing for photos. I don’t do that sort of thing, but here are a couple: 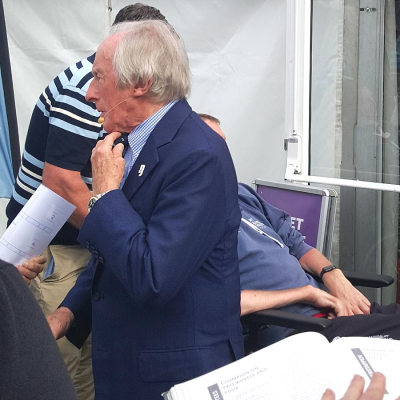 I did not want to be indiscreet, as behind Sir Jackie is the great Doddie Weir. A tragic story of a 51-year-old with MND. He's pretty well helpless now...

The Great and the Good continue to meet over the next three days. We are seeing Clive Myrie, Andrew Marr, and Jack Dee on Saturday and Sunday.

Many others stotting around Melrose at the moment - from Julian Clary to Joanna Lumley - and many many more...
You must log in or register to reply here.