Well after 2 years and 15k miles, my C63 AMG has just been taken away by Mercedes (well, BCA Group). Here is a final pic as it was driven off ;-( 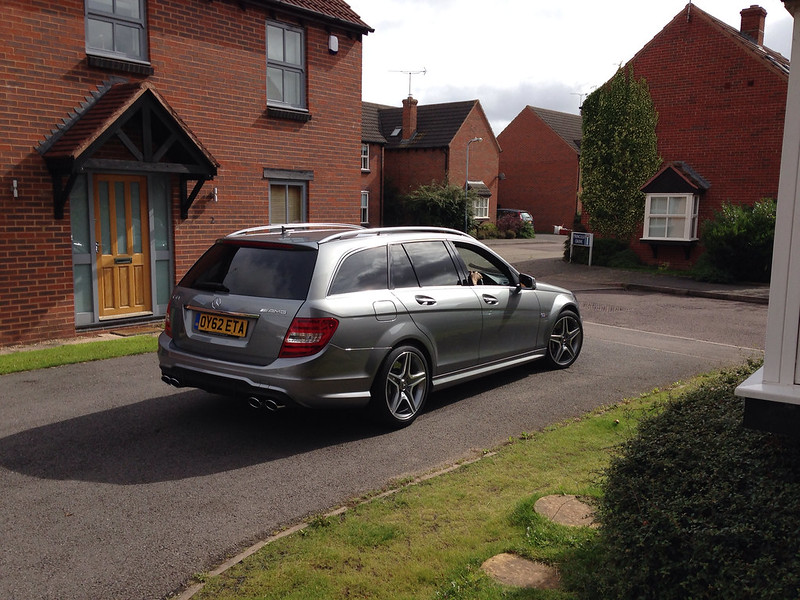 So how has it been living with an AMG for 2 years? Well it all started here: (http://www.mbclub.co.uk/forums/general-discussion/137594-1st-weekend-my-c63-amg-estate-%2Amany-images%2A.html) And now, 2 years later? For the most part it's been great, always enjoying that engine but also the excellent compromise between ride & handling. For those that haven't driven a C63, they really are a very different steer to a non-AMG C-class, something that became most apparent every time I drove a non-AMG Merc.

It was always enjoyable to see those 'in-the-know' people who knew, and always appreciated, what the car was. And for those that did not know, seeing their faces when they read 6.3L on the front wings would always delight. Well, it made a nice distraction from the plummeting fuel gauge!

The above showing how the engine loosened up.

Also the car was Eurocharged when it was 6 months old with 3000 miles. This made a big difference to the top end (over 5000rpm) and also delimited the car. I made a vid of the event, as seen here:
https://www.youtube.com/watch?v=R0iFBDySYZg&list=UU-JHgxs79S7qXfE4-hgjjkw

I took the car on the continent twice, the first time to the Belgium GP in 2013 and the second time to Southern Austria on holiday. The latter trip was 2300 miles in total and I drove the 1005 miles home in one day. The car performed faultlessly, averaging 21.05mpg despite some fast Autobahn work, including a few trips up to 186mph (https://www.youtube.com/watch?v=IGwPDCyUXQU&list=UU-JHgxs79S7qXfE4-hgjjkw)

So what will I miss and what did I like about my C63?
Engine - Low & mid-range torque coupled with real top-end bite over 5000rpm (thanks to the Eurocharge remap) meant it was always smile-inducing. The punch over 100mph was ever amusing however it was the A-road overtaking pace that'll I miss most.

Noise - The morning start-up procedure (better on colder mornings), the exhaust cracks in S+ or M mode, the burbles on the overrun or even just that superb V8 throb when on the Motorway around 2000rpm, it was ALWAYS entertaining. There's no doubt AMG did a superb job giving the car a fairly ludicrous exhaust note, yet one that doesn't drone or impede with refined progress when desired.

Ride - My car had 18s and rode just on the right side of acceptable. Having driven multiple C63s with 19s, there was never a time in my ownership where I felt I'd made the wrong decision to go with the 18s.

Handling - for a big estate car, I think it handled extremely well, aided in part by the 18s and very much by the optional LSD. When pushing-on the weight of the engine can be felt on the front end, however there's enough torque (and drive with the LSD) to neutralise the balance and then push into mild oversteer. It's a great feeling and one that's happily allowed by the ESP when in Sport mode. However with everything off it could be a bit of a handful. Exiting T-junctions would always be a scruffy affair in Sport mode, but with the TC/ESP all off, one had to be very careful with throttle application in order to prevent L-A-R-G-E slides from getting away from you.

Steering - the steering really is very good. It's incredible how different the steering is on the C63 when compared with non-AMG C-classes. Great weighting, accurate and with some feel (rather than the standard 'none' of many cars these days), I always enjoyed the steering of the car.

Tech - for the most part this is good. I kept an iPhone in the central cubby to provide all my music needs, and the COMAND system worked well from a music/radio/bluetooth perspective. The voice control worked well and I liked all the various displays available within the central TFT on the dash, especially the AMG menu showing oil and water temps. I never did get the internet connection to work with my iPhone 5, although for a period of time it did receive and read out my text messages, however this has stopped again. Not the end of the world though.

Quality - I would say for the most part that the car is a quality item. The doors shut reassuringly (even with the windows down - a true test), the loadspace area was very nicely trimmed and appointed (MUCH better than a BMW 3 series in this regard) and the overall fit & finish was very good.
However the big caveat to this is rattles from the dash board. My car went in twice to the dealership and, along with a couple of home remedies, have fixed all the rattles once the car is warm. From a morning start the dash rattles a bit for the first few miles, and is then okay. The only other noise is when going over sharper bumps and comes from the rear. I suspect it's the parcel shelf, however I cannot replicate it from a static position, but it's very infrequent and I was never bothered enough to warrant a proper investigation.

Regarding reliability, the car never let me down although twice in recent months I did have the ESP inoperable lamp come on. The first time was after I'd been routing around in the engine bay to check the oil level. A re-start and all was fine. The second time was driving over a rumble strip on a motorway exit slip road that caused the lamp to illuminate. Again a re-start and all was well.

Dislike - Horizontal boot lip that catches and holds dirt & water.
Dislike - Snatchy clutch let-up when accelerating from stationary at anything more than 20% throttle.
Dislike - Gearbox can be jerky when shifting down to first in S, S+ or M modes.
Dislike - Warning display messages taking ages to clear or until OK is pressed (example when selecting Sport mode)
Dislike - £85 of fuel every 280 miles.
Dislike - No internet with iPhone.

And finally, as a goodbye, I decided to depart the recent PistonHeads C63 AMG meeting in the way AMG intended
https://www.youtube.com/watch?v=WIyYct3dnec&index=1&list=FL-JHgxs79S7qXfE4-hgjjkw

Mine drivetrain is very grabby and I understand it's symptomatic of the MB LSD.

What are you replacing it with?!

Thanks ghibbert, good write up and I pretty much agree with everything you have written. Can't believe 2 years have passed. Still got a few more with mine...I want to keep it! Enjoy the E class!

Pilotprice said:
Good review What are you replacing it with?!
Click to expand...

A diesel mb if I remember correctly.
R

The _Don said:
A diesel mb if I remember correctly.
Click to expand...

I would cry if someone taken my much loved wagon from me I really bonded with her after that trip to France what a car!!
T

Interesting that you only had the one service for the vehicle, did you let her go a bit early then?

I still have a year left in the C63 stable.

When they picked it up did they go into a detailed look over? Try to find faults?
OP
OP
G

developer said:
Bottom of his post/signature.
Click to expand...

I was waiting for someone to point that out


Twincharge said:
Interesting that you only had the one service for the vehicle, did you let her go a bit early then?
Click to expand...


aquanaut said:
When they picked it up did they go into a detailed look over? Try to find faults?
Click to expand...


Yes they did a 'detailed' inspection, however it was pretty lame. No issues found or reported, however it will have another underbody inspection by MB apparently.
D

Big change from a c63 to a 'normal' car - the E is a quality car but must of been some angst with the decision to leave behind a mental engined car no?
B

Did you ever have any issues with Mercedes regarding having it eurocharged, ie when you took it in for servicing etc...

Well it's been almost a week since the C63 departed. I reckon my local Shell station reckon I've moved abroad

Anyway tomorrow my new car is being delivered. First pics from the Dealership below: 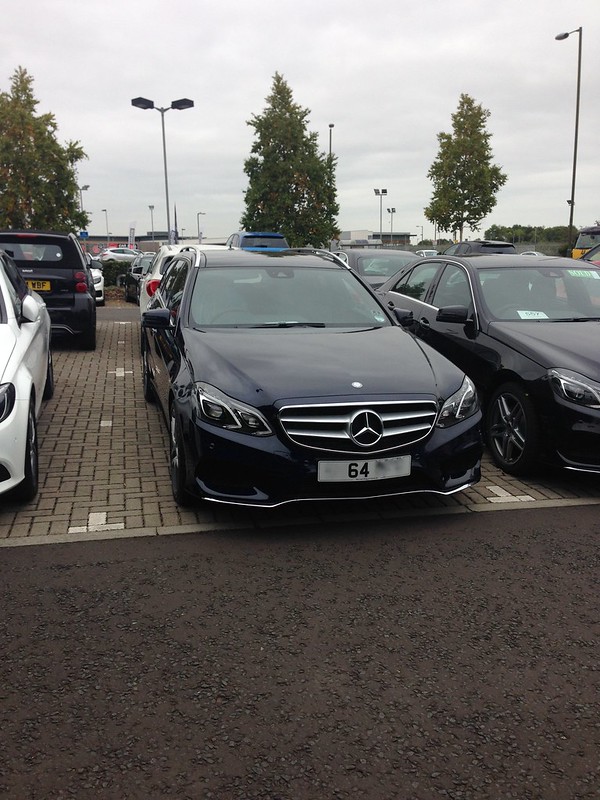 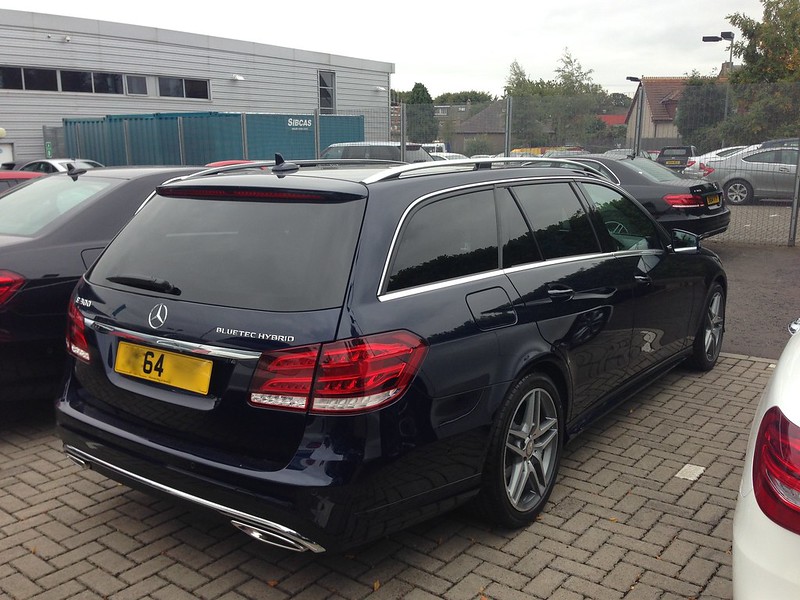 C63 looked lovely, I can see me getting one next probably in saloon.

Be interesting to hear what the hybrid is like, still few and far between on the roads. Although I was in London the other day and I see quite a few S400 hybrids.

All the videos of those special moments I liked very much !