Hi All,
New boy from Essex here. New to the MB got a test drive of a E-Class tomorrow at a main dealer hoping it's what we want on paper. We will see.

Tramper said:
Hi All,
New boy from Essex here. New to the MB got a test drive of a E-Class tomorrow at a main dealer hoping it's what we want on paper. We will see.
Click to expand...

Welcome to the forum from a fellow Essex resident, what spec are you after?

Sent from my SM-G955F using Tapatalk

Thanks, it’s only an SE model the E 220. Sorry never owned a Merc. It’s a approved used one with full history anything I should look for? Mercedes servicing doesn’t look easy I believe a,b and c services they tell me it’s up to date.

Welcome from another Essex Man, which dealer is it?

The dealer is in Colchester Jardine motors I think. It’s a E220 it’ll be my first drive of one so I’m keeping an open mind.
E

Welcome. If you get it pics please
OP
OP
T

Well a quick update.
Went up to look at the car and to drive it. Too k my trade in for them to look at, the car was parked out front, we went in and had a coffee while I was waiting for the salesman. Then I thought I'll have a quick look around it while waiting leaving my wife inside, first thing I noticed was the tyres were worn all round and the front discs worn to excess and pads low.

I went back in and we sat down wth the salesman and the first thing he said was the car is having four new tyres and brakes and discs all round. We went out for a drive which I have to say it drove great I was really impressed it was in good condition with a couple of bits of paint that needed doing which he said would also be done. Now prior to going to see it I told them what my trade in was and what I wanted for it. He said he couldn't go to what I wanted for it (I knew what it booked at and went in a bit high) in the end we agreed on a deal. Also on the phone the day before I put a £500 holding deposit down so I knew I would get first look at it as it only just come in and no phot on the net which they said would be refunded if it didn't suit.

When I checked they actually took £1000. Admin error He said and apologised. The car is an approved used and is due its MOT now and has full MB history. I have a cherished number on my car so we agreed to pick up the car when ready I wasn't in a rush for the work to be done on the Mercedes and to wait for the new V5 on my trade in.

The next day I checked the MOT history online it failed that day on tyres and brakes stating dangerous defects all tyres below legal limit brakes dangerously worn to excess, bearing in mind we took it out the day before with these defects giving it a good blast down the A12.To say I was a bit miffed was an understatement I expected better than that from a main dealer clearly internal processes have gone wrong I duly complained to the guy in charge of the dealership stating what had happened he seemed a bit pissed that I got his mobile (it's on their website!!) he apologised held his hands up and said they got it wrong on this occasion but offered me nothing as a good will gesture even though I paid for MB mats and boot liner on top.

Sorry for the long post but I expected better than this from a main dealer. 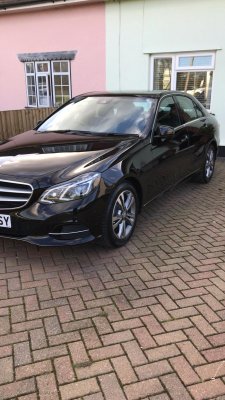 However all sorted now, I hope you got warranty on it though. It sounds as if it had been driven rather hard without much thought about any mechanical or safety issues.
OP
OP
T

Yeah twelve months parts and labour
You must log in or register to reply here.