I have been for a 200 mile round trip today in my SL, the roof was up the whole time as to hot to have it down lol.
My hay fever was awful all day to the extent that I put on my PPE mask and it cleared up almost immediately. Does the pollen filter stop hay fever???
It is a 2019 vehicle that has only covered 2500 miles, is it worth replacing it when it goes for its B1 service in a month or so??

In my experience, I'm always better hayfever-wise when in the car with the windows up and aircon on; I'm sure (as its name suggests), that the pollen/cabin filter should make a difference.

I've had really bad Hayfever for years and years. Until I discovered Fexofenadine. Call up your doctor and ask for it. It's a game changer.

Do you use the recirc feature when the air con is on?
OP
OP

no did not use the recirc button just normal air con, why?

I too have been given Fexofenadine and it is awesome not sure why we need prescriptions though.

Mine is on a repeat prescription.

I've been on prescription anti-histamines for 58 years to date, Fexofenadine first came out as the branded Telfast in 120 and 180mg sizes, with the maximum daily dosage of 360mg/day. Some years ago generic Fexofenadine Hydrochloride became available and was much cheaper for the dispensary than Telfast (which is still available, as due to shortages earlier this year - or maybe it was last year - our dispensary supplied me Telfast instead of generic). However, the bumf inside the packet (of 120mg tablets) now says maximum 1 tablet per day. With my experience of using these for many years, when the pollen count goes through the roof and I'm suffering badly I ignore the 1 per day limit, have been on 2 a lot this year but so far (touch wood) have not had a 3 day. The big advantage of Fex is (for me anyway) lack of side effects, especially drowsiness, but it is prescription only. It's predecessor Triludan (Terfenadine hydrochloride) briefly went from prescription to over the counter, but was then banned after Americans drinking something daft like 7L of fruit juice a day had problems!

kcsun said:
no did not use the recirc button just normal air con, why? 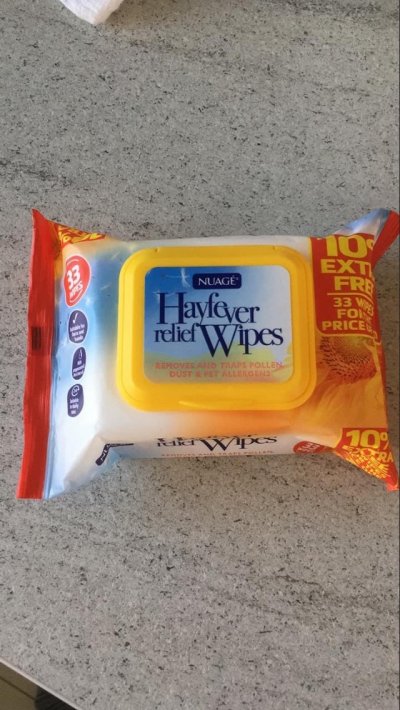 I’ve tried these.
my bum is lovely and clean now, but my hayfever is as bad as ever.

Yeh these were the biggest con. I bought 4 packets and have only used about 15 wipes total.
S

keep ya exaust tips clean doe they
You must log in or register to reply here.

F
Brake dust - is this normal
2