It is over four years since I Iost my best mate and dog of a lifetime, Bruce.

12, years of owning the king of dogs, a loving, loyal and all round super fella that had been in and out of the dogs home before I took him on, was to prove to be a fantastic experience.

Bruce was the dog that, after my spine injury, would slow down or stop and turn around to see if my weak legs were carrying me along and the dog that waited at the patio doors every night in anticpation of my returning home after weeks in the spinal unit in Southport.

I have often contemplated posting a tribute to Bruce on MBClub, but have found it difficult to do so because of how upset I have felt when looking at pictures and videos of him.
I owed it to him to post a tribute, but couldn't do it - I only really started look at the pictures and videos of him last year, so upsetting was it to view them.
I knew that when the day came to say goodbye to Bruce, it would hurt me, and it really did upset me to lose my best friend that had been written off by others and had endured a harsh early life. Yep, I'm upset writing this post!

Here is a picture of Bruce, not long after we bought him for £75.00.
He really was the king of dogs once he had settled in with us.
Love and grub are the two main ingredients when owning a dog, especially one that has had a hard time in former ownership and had spent a long time in his cell in the dogs home. 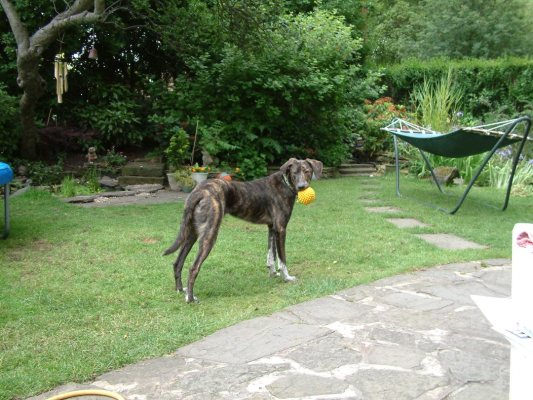 I'm so sore after losing Bruce that I haven't been at all interested in getting another dog, even though I can hear him say "Go on, Dad, get another one and look after him like you did for me."

However, for quite a while now, I have found myself with a lot of time on my hands and don't really leave the house much, so aound 6-8 months ago started browsing dogs that neede rehoming.

Without being too critical of the various dogs homes and charities, they have made taking on one of their inmates, very hard work indeed, something which may have transpired because of Covid restrictions?

So, time goes by and on and off, I occasionally browse through adverts for dogs...

What happened next, really was a big decision for me to make, so much so, that my son had to push me into it and it was a spontaneous event.


In late March, I bought a 5 month old puppy.
5 months is quite late to be taking on a pup, because training is something I believe should start as early as possible.

However, Milo, (he had already been named) is here to stay and has provided me with nice distraction, love and also a bloomin' challenge!


Here he is, a day or two after we collected him at 5 months old. 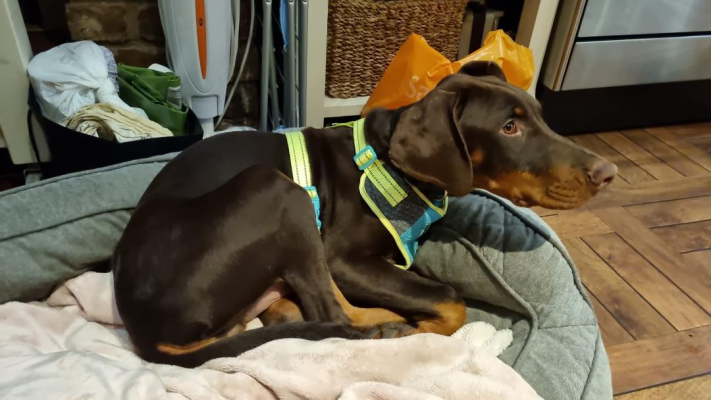 Since being with us, he has flourished.

Here at around 9 months old. 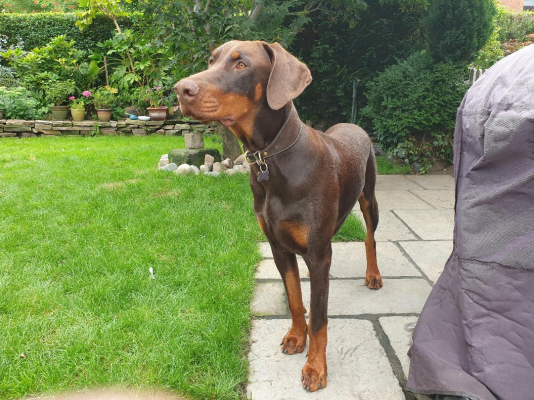 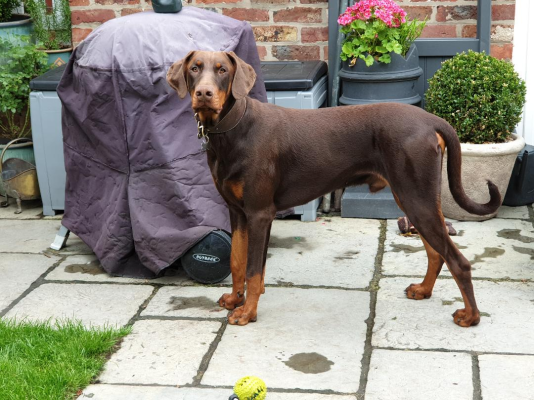 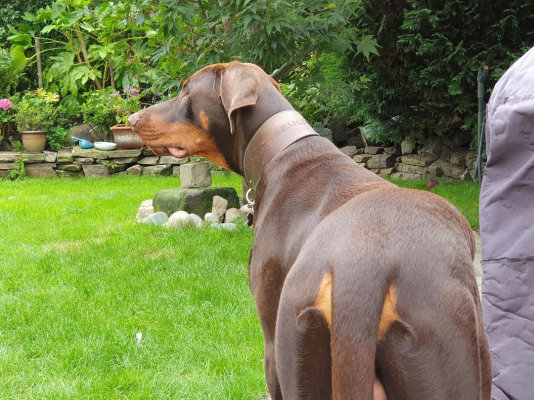 We are both seated and he never leaves my side for long. 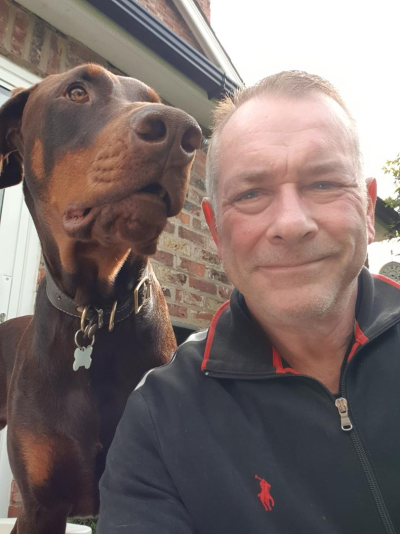 Mylo is very intelligent, so much so that although he knows he isn't allowed to chew the circular leather base of my office chair, to combat getting into trouble for the chewing offence, he puts a tennis ball in his mouth and pretends to be chewing the ball whilst actually chewing away at the base of the chair.
I'll give him that one for the sheer slyness and cunning he has.

Size-wise, Mylo is pretty large for his age.
At 8 months old, he was 28" at the shoulder, which is the adult size for a fully grown male Doberman.
Quite how big he will grow to be remains to be seen.

Sit, lie down, and give paw were very easy - perhaps he had some grasp of those commands, perhaps from a previous owner?

However, Milo can sometimes be a bit of a handful.
Recall, sometimes reacting to other dogs and also being too protective of the house, are things that need work - lots of work, although he is making progress and perhaps some of the liveliness he shows is hormone-related. Those little sparrow egg-sized gonads are now in danger of requiring planning permission. :/

Milo is a good distraction for me from other things at the moment and has given me some purpose to get off my backside and look after him.

I'd like to place on record, my thanks to our very own member Doberman (Rick) for the advice he has given me and for sending me pictures and videos of his Doberman, Cass which inspired me to take the plunge and get Milo.

What a beauty, I’d really like a dog some day. I have a friend who has a Doberman cross (not sure what with) and she’s amazing. She recently had to have a front leg removed due to cancer but the way she has adapted is astonishing, and still seems so happy and full of beans. Amazing animals dogs.

What a touching tribute to Bruce. Thanks for sharing.

Milo looks to be a cracking hound and I'm sure will be a worthy apprentice.

Thanks for posting what must have been difficult for you to do.

What a handsome big boy he is.

I know Bruce meant a huge amount to you Paul, and those 12 happy years will stay with you forever: Milo looks and sounds like another wonderful, loyal and loving dog - you’ve both dropped on there - he couldn’t wish to find someone to love and care for him more, and it sounds like he’s showing you the same.
S

Many of us, I'm sure can empathise with you, I certainly can. We've been without a pup for just over a year now and can't bring ourselves to even consider getting another but looking at your great tribute to Bruce and the fact that you now have Milo has made me think..'never say never again'. Good luck to you and enjoy.

Lovely dogs both of them.

When dogs are puppies they are great used as skirt-magnets.

This is a how to catch an attractive two legged bird using dogs as your sidekick.

Lovely story, always ice to have a good dog around fro many reasons. Our make us laugh every day and wince on others…

you mentioned his gonads being in danger, sometimes for the best but there is “chemical castration” too, not permanent but gives you an idea if the permanent solution will be worth it or not. Enjoy Milo.

Thanks for posting the Bruce and Milo story. Having never had a dog, until 10 months ago when we acquired an 8 week old Cockapoo puppy, I would have found it difficult to really appreciate how much they become part of the family . Now we cannot imagine going back to how things were . Good luck with the your new pal who will keep you occupied if he’s anything like ours

What a handsome fella

Lovely Tribute to Bruce. Milo like most of the German breeds looks a loyal and Intelligent friend.

Have a great time with him.

Great to see you back on the forum Paul.
Talk soon.

Derek and Norman say “Hi” to Milo.
They think they are Dobermans.

Having lost my dog to cancer I fully understand and sympathise with your feelings.

Please keep up updated as your lovely puppy grows.

Milo the Superdog, if you know you know

Nice one Paul. He looks a cracking hound.

A handsome, proud looking boy!
Fully agree with you re rehoming kennels. After trying to rehome from them my daughter ended up flying Ruby in from Barbados. She came from a kennel we were familiar with. Ruby is a "Bajan Cane Terrier" a breed that we invented and that any Bajan dog can join as there is no breed standard!

Invoking 'section 75' sale of goods act (credit card) . The bicycle experts on here might also like to chip in. Boardman.
2