it's that time of the year again ...
Marvin's praying for good weather because he's looking to leave Germany for another three-week-or-so UK road trip in less than two weeks. This time I'll have my folding bike attached to the roof rack so it will actually be used instead of merely kept folded and covered behind the driver's seat like last year

Set up works and looks like this at the moment: 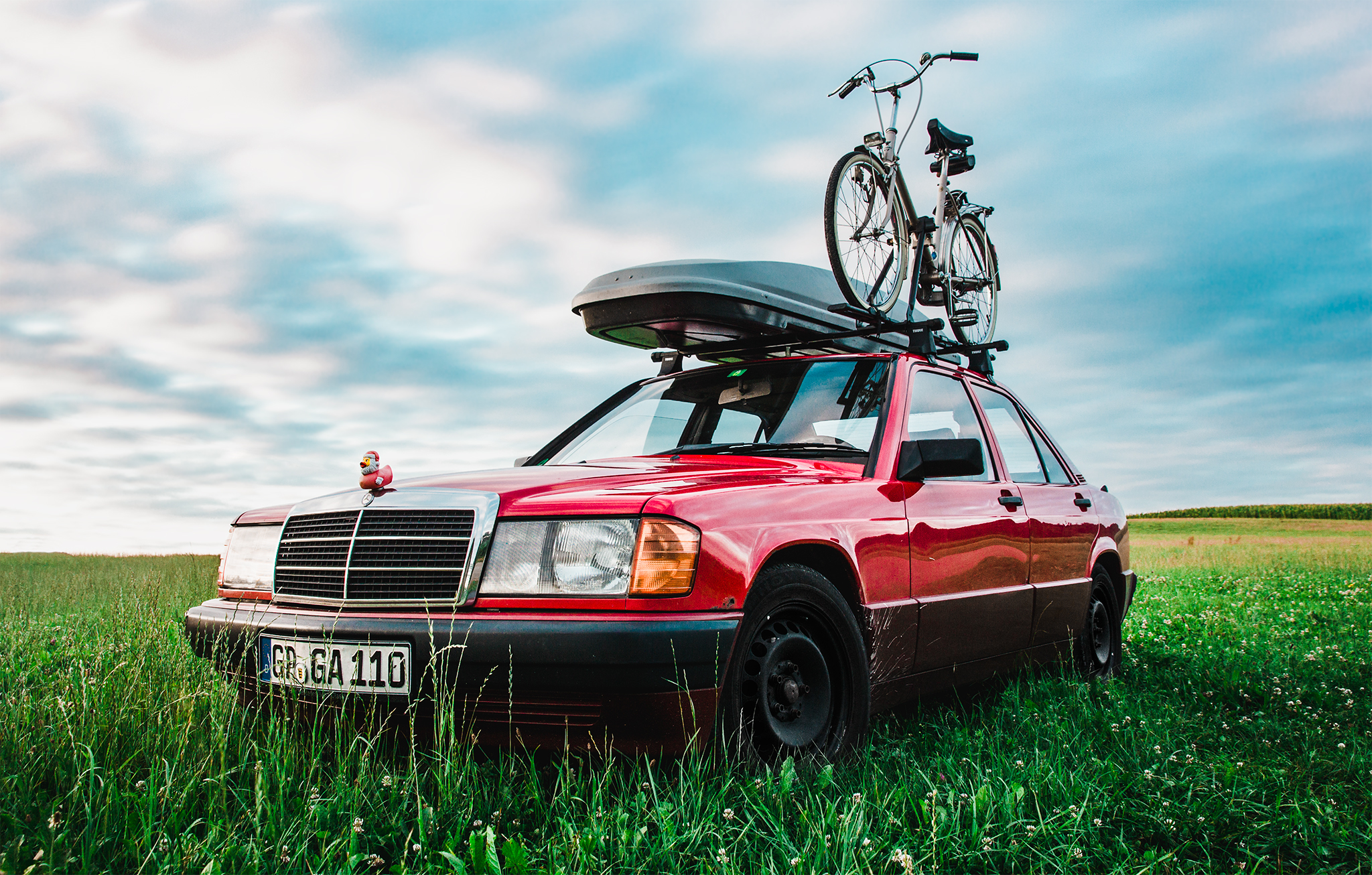 Please excuse the ridiculous bonnet star substitute, but the trident was stolen a few months ago and I couldn't yet be bothered to pay some 60€ for a new one (any proper ones with a 201 part number [important] to be found in the UK?) since there have been quite a few other things that needed to be sorted out like a new head gasket in March or new reinforced coil springs which still need to be mounted so I don't get stuck in the Cornish prairie looking for some remote overnight accomodation ...

Also I have taken out the passenger's seat and the cr4p in the rear and put in a wooden board with some 2 inch plastic foam which makes for a nice bed - better than a tilted seat, that is. I'll post some pics of the finished interior once it's done, but to get an idea ... 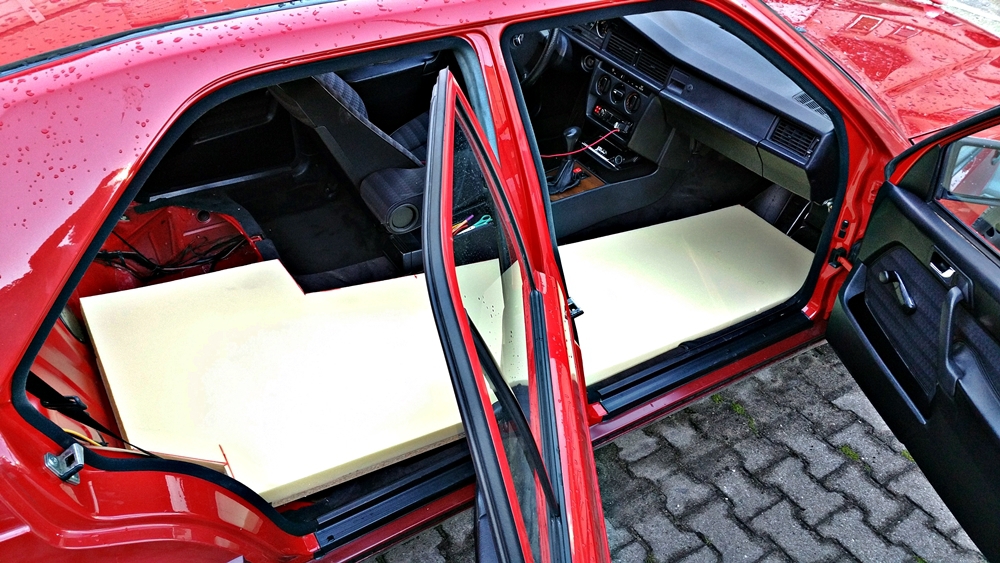 Bought some cloth as well to cover the chassis parts: 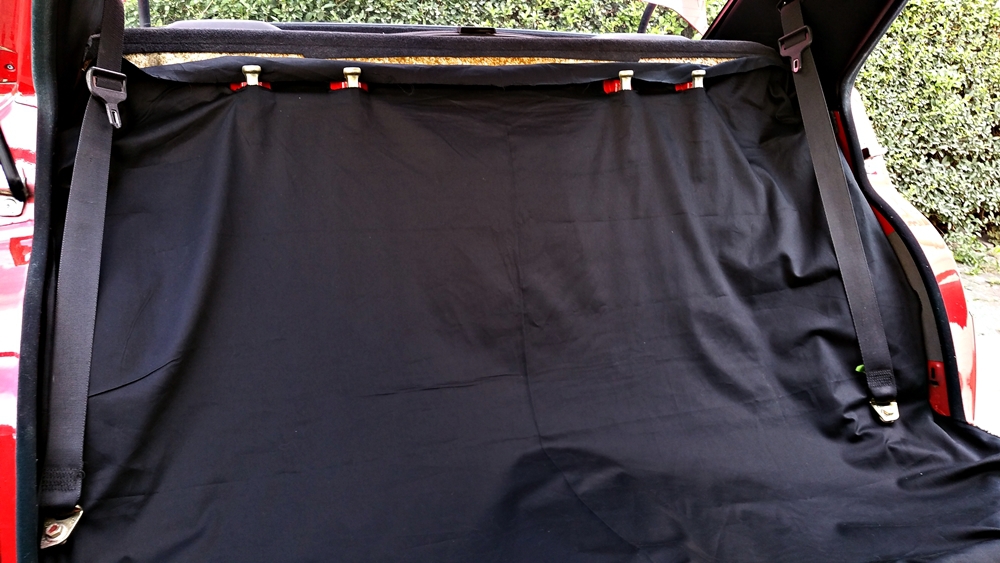 Still need to build a few minor things and some handy stuff but apart from that I'm ready to go on another adventure ... I just hope I'll be having fair weather again (I was lucky 3 times already ) otherwise I might end up in northern Spain or southern France or somewhere else, but those places don't quite speak to me the way the Great Britain does

I'm sure the UK weather for the next 12 weeks is glorious sunshine.

Watch out for the height of the bicycle.

I was sitting outside having some coffee and cake at a town centre café a while back and there was a crashing and scraping sound - a car with a roof mounted bicycle tried to enter a nearby car park with a height restriction barrier to stop motorhomes entering. Result - one mangled bicycle and rack.

Marvin16x said:
... This time I'll have my folding bike attached to the roof rack so it will actually be used instead of merely kept folded and covered behind the driver's seat like last year

As well as Dryce's warning about height barriers - and no doubt height issues on ferry/eurotunnel - have you considered the reduced MPG and increased wind noise?

Perhaps keep it folded and inside for the long journeys, but leave it on the roof when touring short distances?

In any case, hope that you have a great time!
OP
OP

Meldrew2 said:
Perhaps keep it folded and inside for the long journeys, but leave it on the roof when touring short distances?
Click to expand...

That's exactly what I'll be doing. Thought about that issue just today when I passed a carpark with height restriction. I will have to put a sticker on the steering wheel and/or the windscreen to remind me of the added height. I'm usually very conscious while at the wheel but sometimes one's brain's on stand-by or concentrating on something else. Two years ago in Scotland I found myself driving on the wrong side of the road because my mate kept confusing me about the correct route - that one clearly wasn't.

It's going to be annoying though taking the bike down every time I want to enter a carpark. There are quite many now with those restrictions, I reckon. But that's just another reason to avoid 'em. Spend too much on parking fees last year already. :fail

I am living the bed setup - could be tricky if you get lucky with an English Lady!

I am sure the weather will be glorious as always...

Reminds me of a trip me and two mates took 20 odd years ago around Europe in a 110 V8 with 3 bikes on the roof. Hastings to Prague was our first stint, got to Prague very late and found ourselves in a car park after a wrong turn

I said to my mate, get out and make sure we aren't going to hit that concrete beam with our bikes will you old chum

You're in the clear he replied, bswiftly followed by a bang and swearing

My sister's sofa bed many years ago had a 3 inch thick mattress. That was sheer purgatory. Bit more padding possibly Marvin?

Great to see the annual road trip planning underway. What's the planned itinerary for this year?

This may sound ridiculous but forgetting the bike is on the roof is so, so, so easy to do even when you think you're very aware of it being there. Don't ask me how I know. Or go looking for the damage on an iron girder on a car park in North Devon

I still have the other half of the "mattress" that I may cut to size and put in as well. Not too sure though whether this will make it any more comfortable as it is rather sturdy foam (should have bought a softer one)

Maybe I'll just place a blanket on top of it, that should do.

Bobby Dazzler said:
So which places in the UK are your to do list for 2017?
Click to expand...

Good question actually
Last year I found that - as much as I love driving this car - I was on the road too often, too frequently. Exploring the entire south coast in three weeks required daily movement and this time I just want to stay at certain places for longer if I feel like it. Many places in Cornwall I liked a lot. So I might drive straight into Devon and Cornwall. I'd love to finally see the south of Wales too so might end up going there first. But no going up north for me this time. However, I do miss the Lake District and Scotland! So I'm clearly not running out of destinations ...
Last edited: Jul 21, 2017
N

You'll look back on these escapades for the rest of your adult life Marvin.

Just be sure to have a security plan; what are you going to do when you are woken at night by a hord trying to break in. Just have a plan - what ever that may be...
Last edited: Jul 21, 2017
R

I like the fact that you have probably seen more of England than many natives have
If you travel anywhere near Hastings when I have a day off, then I'd be happy to buy you lunch.
You must log in or register to reply here.

A
UK law and court judments
2