At our flat in Greece. Had a six page long thread on here about the way they bolted a heavy duty steel pergola to the wall with the rods not straight and out the wall. Ended up taking it no further but luckily it's still standing! A lot of the work and especially finish / quality and care taken is quite poor, simple things like not grouting neatly, not finishing things properly but this is their standard of work and if you want to get better you'll have to pay more than the average of 160,000 euros for a two bed top floor flat. We now have a damp spot and some ceiling damage directly underneath one of the drains of our roof garden. Apologies for extra large pictures of drains

We've got an exposed roof garden about 8x4 meters squared and a covered balcony below which spills out from the living room and kitchen about 5x5 meters squared. The lower balcony drains seem to be what I'd thought was standard. Both balconies are on a tilt. Lower balcony water flows into drain cover, into pipe through pipe onto ground floor in car-park. But I did have to push and bend down the back-flow flaps on these ones because they weren't taking water quick enough. Someone commented they look like shower drains (Stainless steel ones in below pictures.)

I had an issue a couple of months ago with the roof garden drains being blocked by debris and I thought water was pooling in that corner and not getting down quick enough. After heavy rain, water does sit in the corner because the drain isn't right in the corner. Anyway, I pulled the cover off and found a mixture of sludge, cement, some sort of waterproofing material like substance and it just looked a mess trying to work out what was going on. The drain fittings they've used were cut at the bottom, different sizes and because they had been cut at the bottom, the down-pipe attachment as part of the fitting was so short, water was just flowing through the drain cover into the cement. I also noticed what I think or thought was a bit of the pipe cracked on the left hand side around 10 on the clock on the first picture where water could be getting in. I also saw what looks like a pipe fitting further down about 30 inches as you can see to catch the water. I don't know whether that's the only pipe or there's one on the outside of that which is the cracked thing towards the top of the hole where the drain cover sits at 10 on the clock.

Anyway, contractors of the building came back the other day. The knifed out a load of the silicone around the tile skirting in the area which was wet behind, let it dry and then used what I think was epoxy grout to replace the silicone. They then used something, I don't know because I wasn't there, could have been the epoxy grout could have been something else like standard cement, and they tried to refit the same sawn off drain cover fitting and basically just covered that crack and all around the inside of the hole with cement and grouted around the outside of the cover, something that wasn't previously done. When they left I had to pull the lids back off because a lot of the cement had got in the gaps under the drain lid and it would have blocked. So i've attached pictures of the holes.

Can anyone advise further? Is this standard? No idea what they've originally done, why they seem to have struggled to do the job properly in the first place and why they thought it was acceptable and a good long term solution to just chuck a load of cement in there and hope for the best. Can anyone advise how this needs to be sorted out properly? 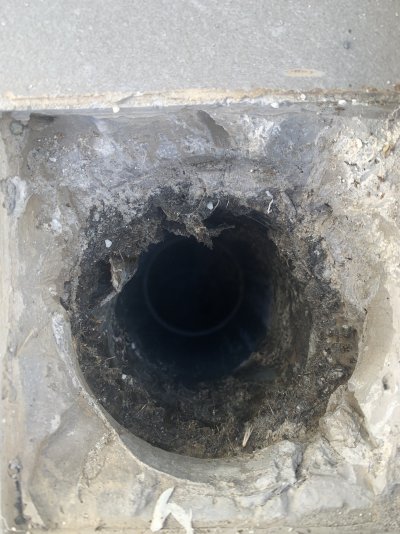 G
Are these wall cracks structural?