Yesterday after much prevaricating, I decided to replace the front discs and pads on my 2003 SL55AMG (73k miles). The reason for my reluctance was reading the many and varied suggestions here and on other forums on how to avoid having my fingers crushed by the SBC computer applying the brakes unexpectedly. To be honest I have changed brake discs and pads on most of the cars I have owned, including a C3 Corvette, Audi Quattro, E class Merc, BMWs etc etc, the SBC however and reading the warning posts did give me a few concerns about doing it myself.
I bought the car last July, and within a month bought all the necessary bits to replace the brakes and pads. A pair of new Genuine MB Discs, x8 new MB Brake pads, x4 new retaining pins and x4 new retaining spring clips, a new brake sensor wire, x2 new brake retaining screws, x4 new brake caliper to hub carrier bolts all from Mercedes Benz Parts, total cost £500. (Pics of part numbers in this thread)
So after much research.. I took the plunge.
My procedure is as followed and it worked as expected.
This method works well for me on this car. I this helps to reassure anyone that a competent home mechanic can replace the discs and pads without the need to have STAR.

I always strive whenever possible fit OEM parts to my cars..
The brake discs on an SL55AMG are a massive 360mm and drilled and vented and weigh about 30lbs each!

The old pads were about 60% worn and the old discs were most likely originals and had a lip and some light grooved wear.

Here are a few pics of this job. 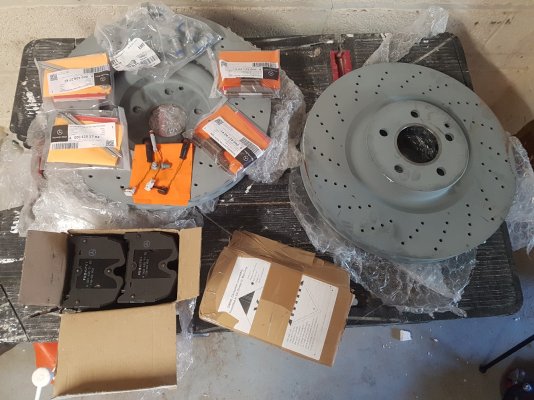 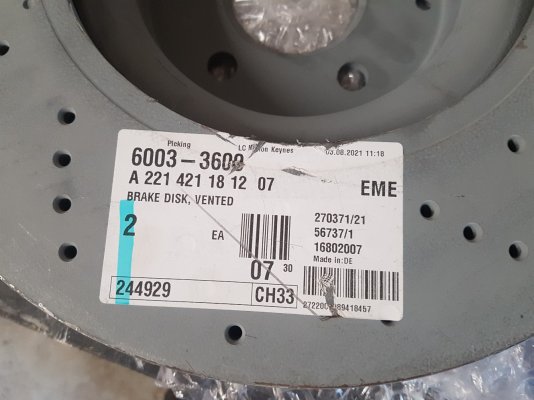 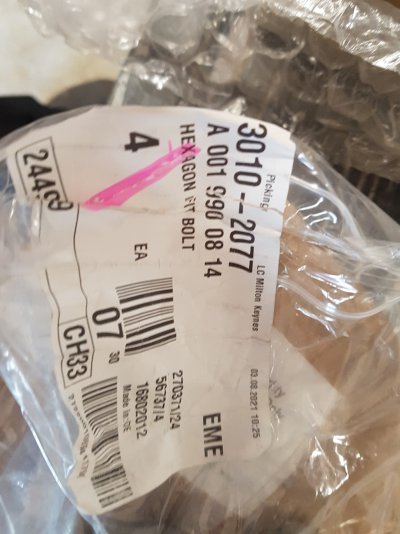 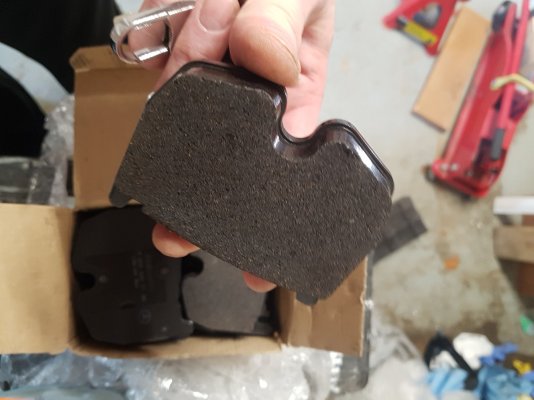 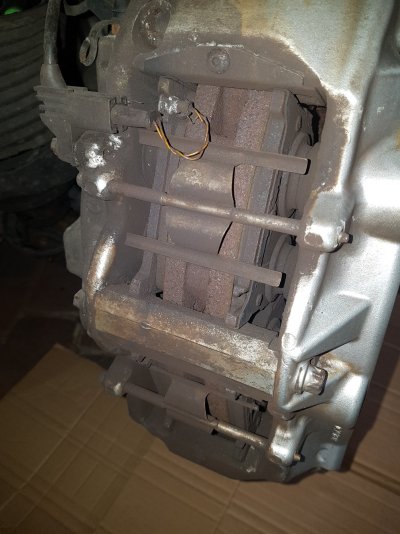 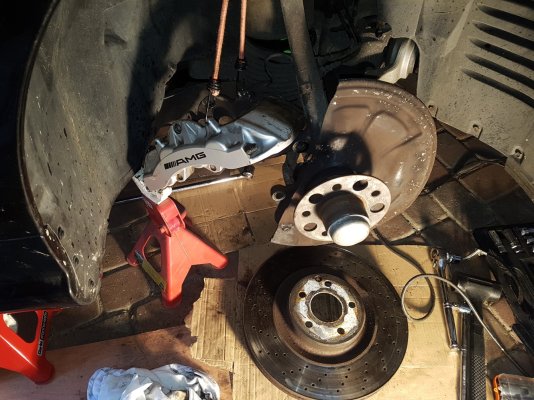 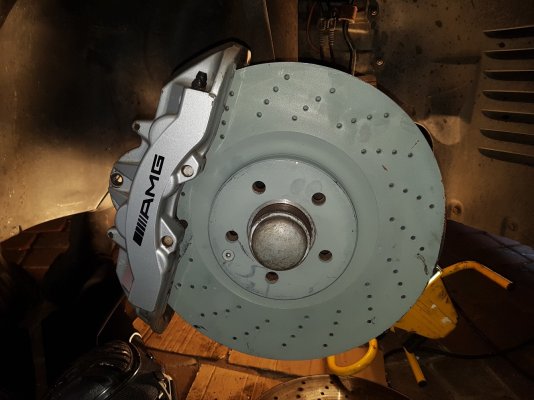 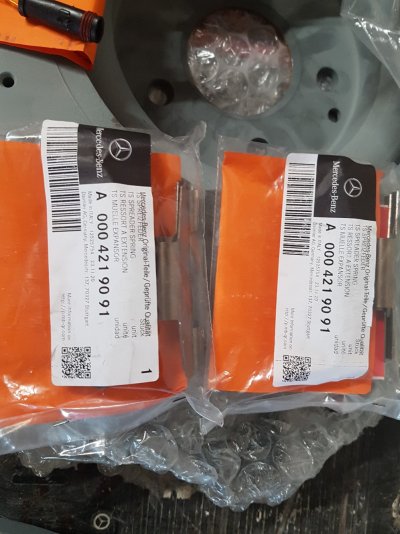 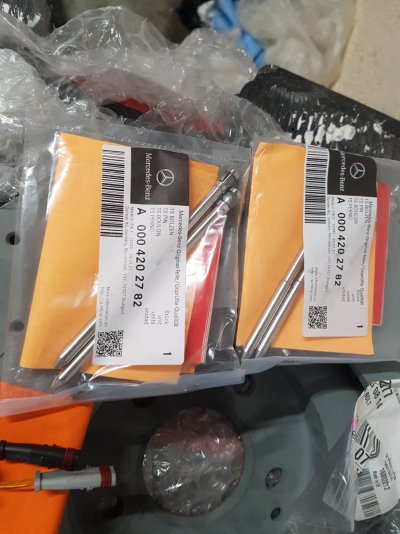 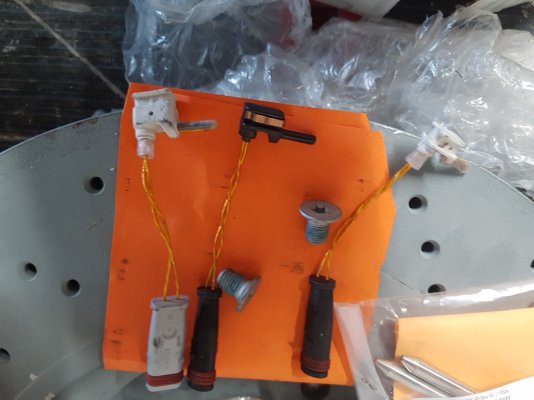 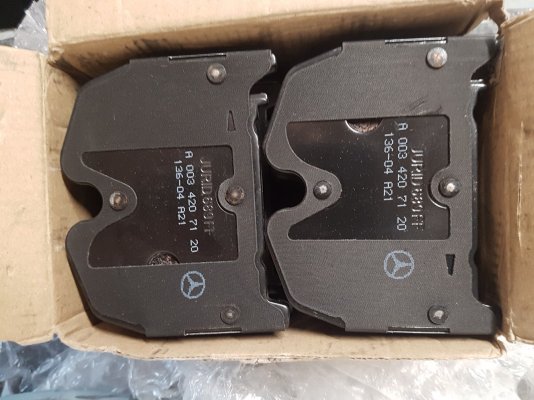 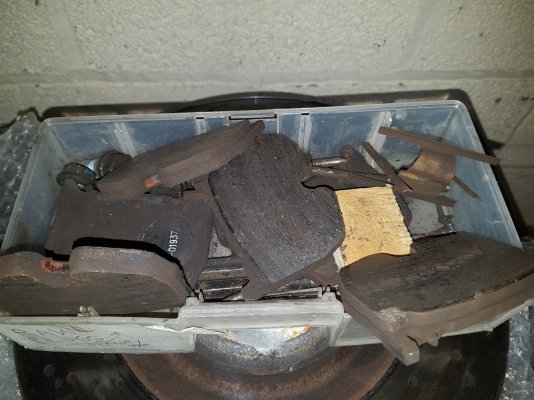 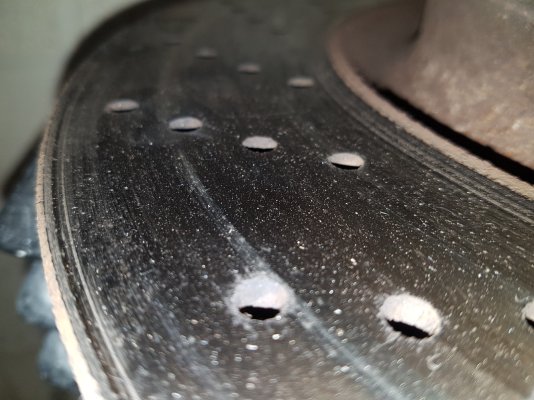 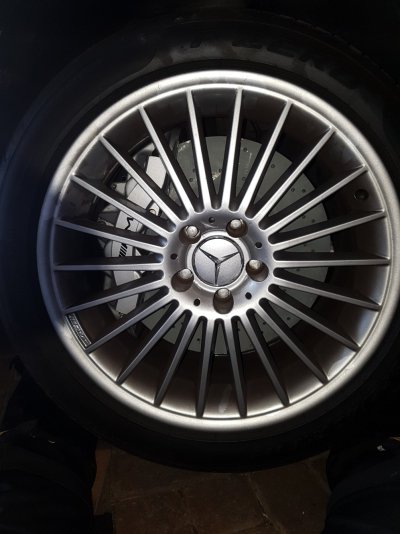 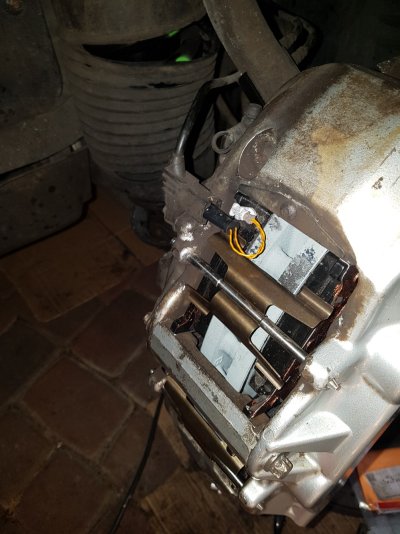 I may have the calipers repaint refurbished at some point, the pistons moved easily with no signs of seal
deteriation.. I did see that the front shock dust covers have split when dropped down fully on the jack. This car had refurbed front struts a few years ago.. so I am surprised to see that.

Good job, well done. Great pictures, should help any novices who are reluctant to try it.

Fair play to you mate, great work. I'd never have the balls to tackle this myself as I know when my indie when to do my fronts on the CLS the pins were seized and he had to cut them out in sections and gently tap out the remainder....eek !
On my old E wagon, it has the Brembo brakes as it's a sport model and with similar pins as well ... they were of similar vein
OP
OP

Thanks for the comments... the retaining pins came straight out..
I noticed an updated design of the retaining spring clips also compared to the old ones..
brakes bedding in nicely.. big improvement on brake feel and bite... smooth and quiet..
the old brakes felt a little wooden... underwhelming.. 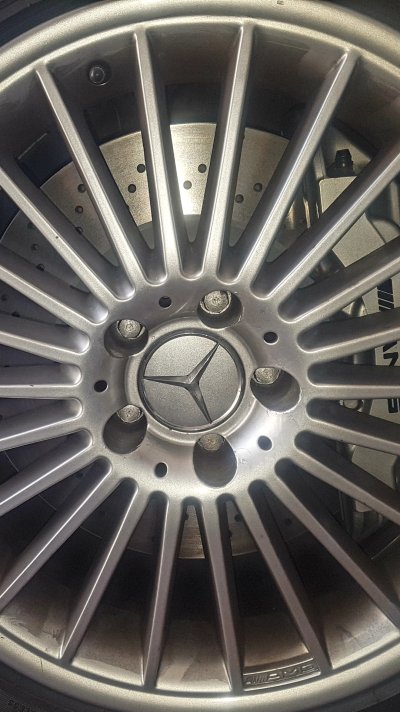