Slowly making progress but have run into another problem.

When I bought the car the previous chap had fiddled about with some of the earth wires under the dash. He could not remember why. I had about three exposed which meant I had no indicators working on the car.

Electrics isn’t my thing so I got a chap round and he got them going by reconnecting them. All was good, indicators working.

So I’m prepping for Mot and switched the side lights on, and on come the two green indicator lights dimly. I tried the indicators and they still work fine albeit with a light show.

I have no dashboard lights.

Spoke to electrician and he thinks it’s an earth problem or maybe within the circuitry of the instrument panel. I’ve purchased a replacement just in case.

I can also see a bare black/red wire under there which I don’t know what it is. Electrician not being that helpful tbh, which is a shame given what he charged me!

I’ve attached a YouTube clip which shows it all except me working the rheostat.

Looks like some fiddling about has gone on. Probably an attempt to fix a previous fault by picking up a feed or using a remote earth rather than fixing the original fault. The side lights appear to be looking for an earth via the indicator warning bulbs, both of them lighting up could mean the hazard light circuit is involved.
Maybe take a look any non original wiring and see where it goes and which circuits it affects, as I said earlier it looks like a dodge round what was probably a very simple fault that has created a bigger set of issues.

Agree with Tricky, probably an earth fault. Have you checked the grounds at your tail lights? I'd expect the issue is around your cluster and switch as it's the same for both sides.

I'd pull that lot out and start tracing the wires back. Once you find what someone has done, you can undo it and then get back to a good starting point.

I know a good auto electrician but he is Dartford/south London based so I guess it depends which of your locations the car is in as to whether or not he can help.
OP
OP

Thanks both, yes there were brown earth wires bare under there - I just wonder if the old chap I got it from had this problem and it's just been reinstated! In the meantime I've bought a spare cluster from Rob P so I've got that up my sleeve if it is part of the circuit board that's gone awry. I hate electrics!

I doubt it will be the cluster mate, it's not looking like that type of fault to me and there'll be very little in the way of circuitry for those indicator tell tales at the age of this car.

Looks as though you have a few bare wires there from some previous butchery to look into and see where they go. The (possibly) brown red striped one above the throttle is interesting as it's not a standard colour for anything aftermarket so I'd want to know what's going on there.

Out of interest, have you had a look at the tail lights when this happens? I'm wondering if the indicators are lighting up when you have the lights on, even if only very slightly, you may need to remove the lens to see the bulb properly. Normally this manifests with the extra current of brake lights when its a bad earth but it's still worth checking and costs nothing to do.

Keep us up to date though, I'm definitely interested in the outcome.
OP
OP

@Blobsta thank you - I’ve been told that sometimes the circuit board can fail, so I’ve got a spare as a backup.

The brown/red wire you refer to is actually black/red - I’ve not traced it yet, but on the diagrams is associated with the tail lamps?

I should add - this used to have an aftermarket alarm fitted, removed before I got it…

Greetings All: I have a 1983 300D whose instrument lights are dead. I put another instrument cluster in and same thing. It isn't the rheostat. I have
www.peachparts.com 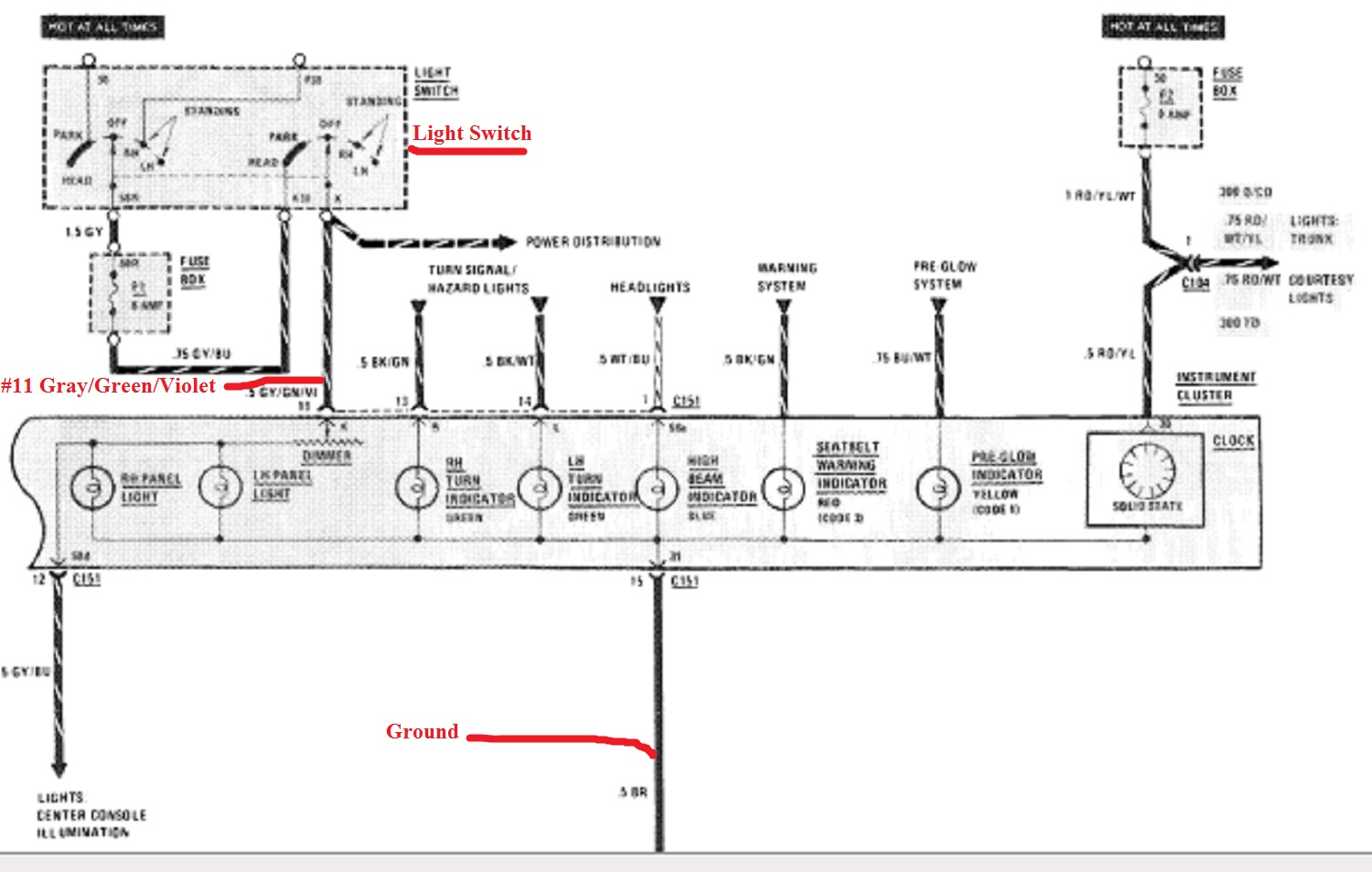 Last edited: Yesterday at 4:13 PM
You must log in or register to reply here.