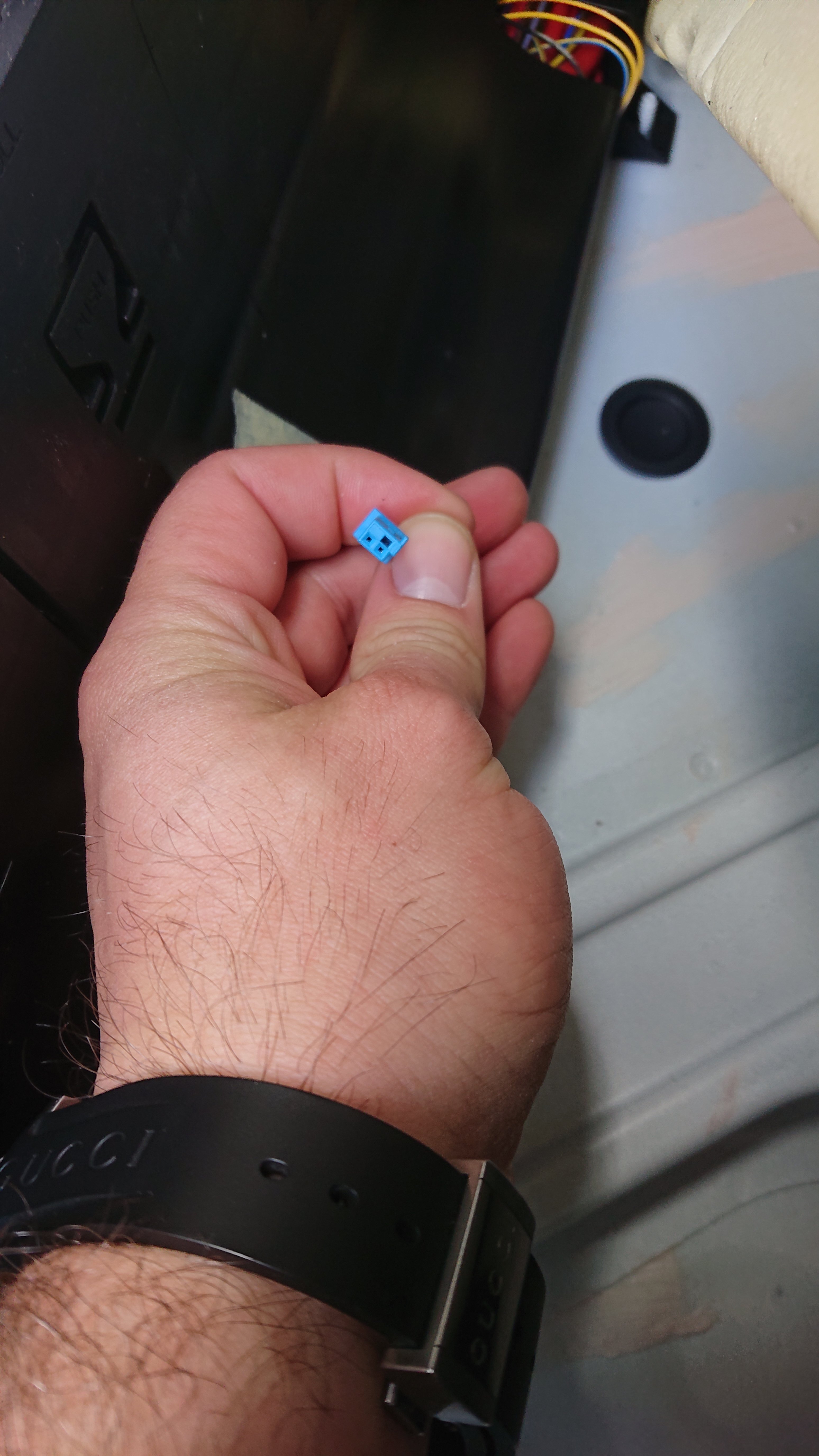 I have wanted to install illuminated sills on my C63 coupe for a while and got chance to have a research into it this weekend, and noted on a few forum posts that some cars come pre-wired. I removed a few bits of trim today and found this wire hidden away, which looks like the right one for the sills. I checked for a voltage and it has 12v with the door open, there are a few threads on this forum though where people have said that the sills aren't 12v so you can't just tap into interior lights etc, but this wire certainly has 12v to it, so am I going to need a voltage convertor or are they indeed 12v?

Following as i really want these on my coupe, although OEM prices are ridiculous for a pair
OP
OP

ash59fifty-uk said:
Following as i really want these on my coupe, although OEM prices are ridiculous for a pair
Click to expand...

How much are they from a dealer?

C63AndyP said:
How much are they from a dealer?
Click to expand...

A few hundred, there’s a pair of them on eBay for sale used at £113 per sill, they have the same connectors as you’ve pictured so possibly plug and play?

I looked in the brochure and they are a £625 option, no wonder nobody specced them.

CKS sell them which means they’re available elsewhere but cheaper, trying to hunt a supplier down

I’ve done this install on mine.
If you buy genuine sills (managed to find some 2nd from Germany) they are just a plug and play no wiring needed.

The little blue plug under the carpet is pre wired. It was just tucked away depending on what options the car had when new.

I have bought the ones from america on ebay, so fingers crossed.
OP
OP 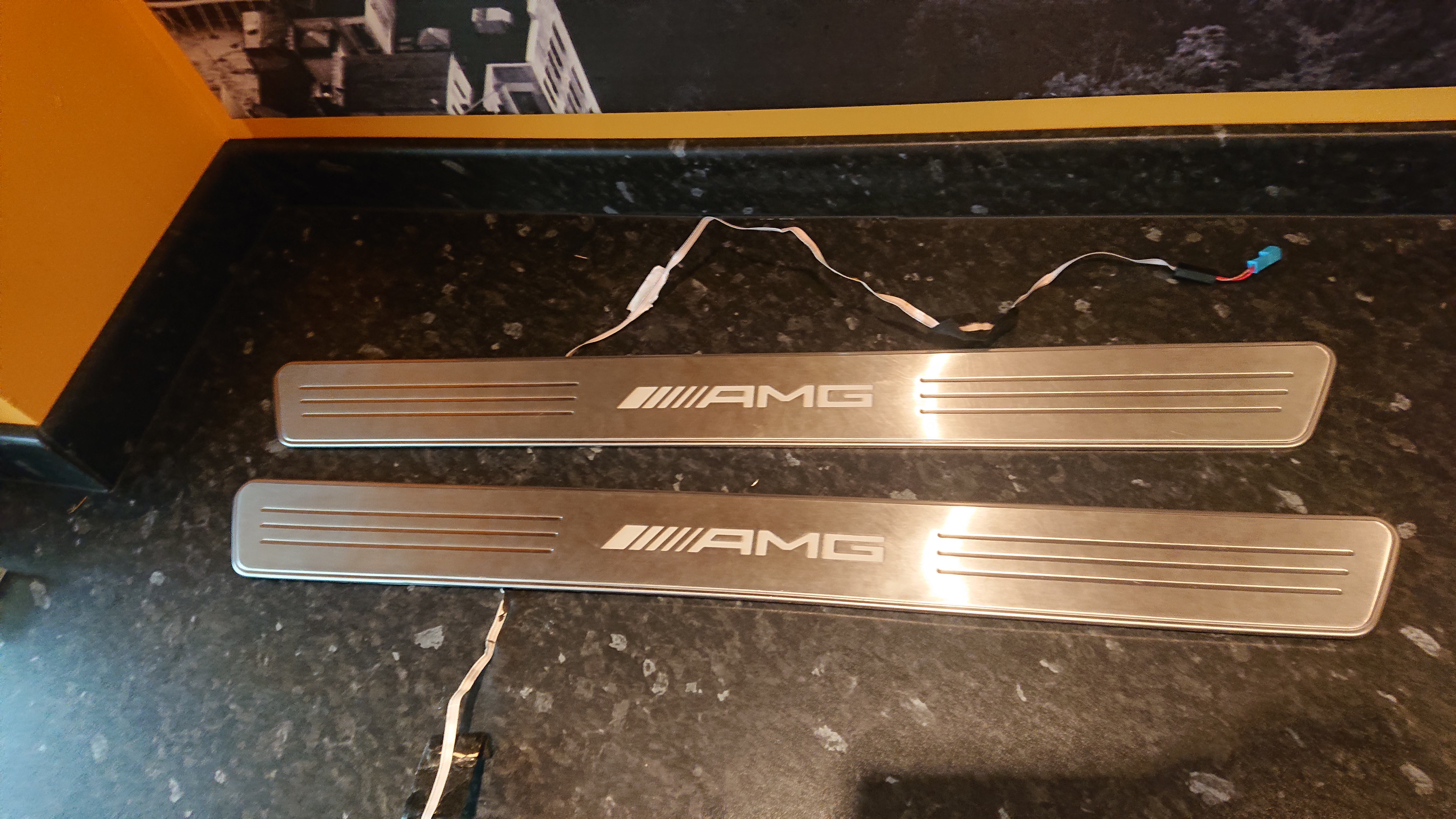 Had chance to fit them yet mate?
OP
OP 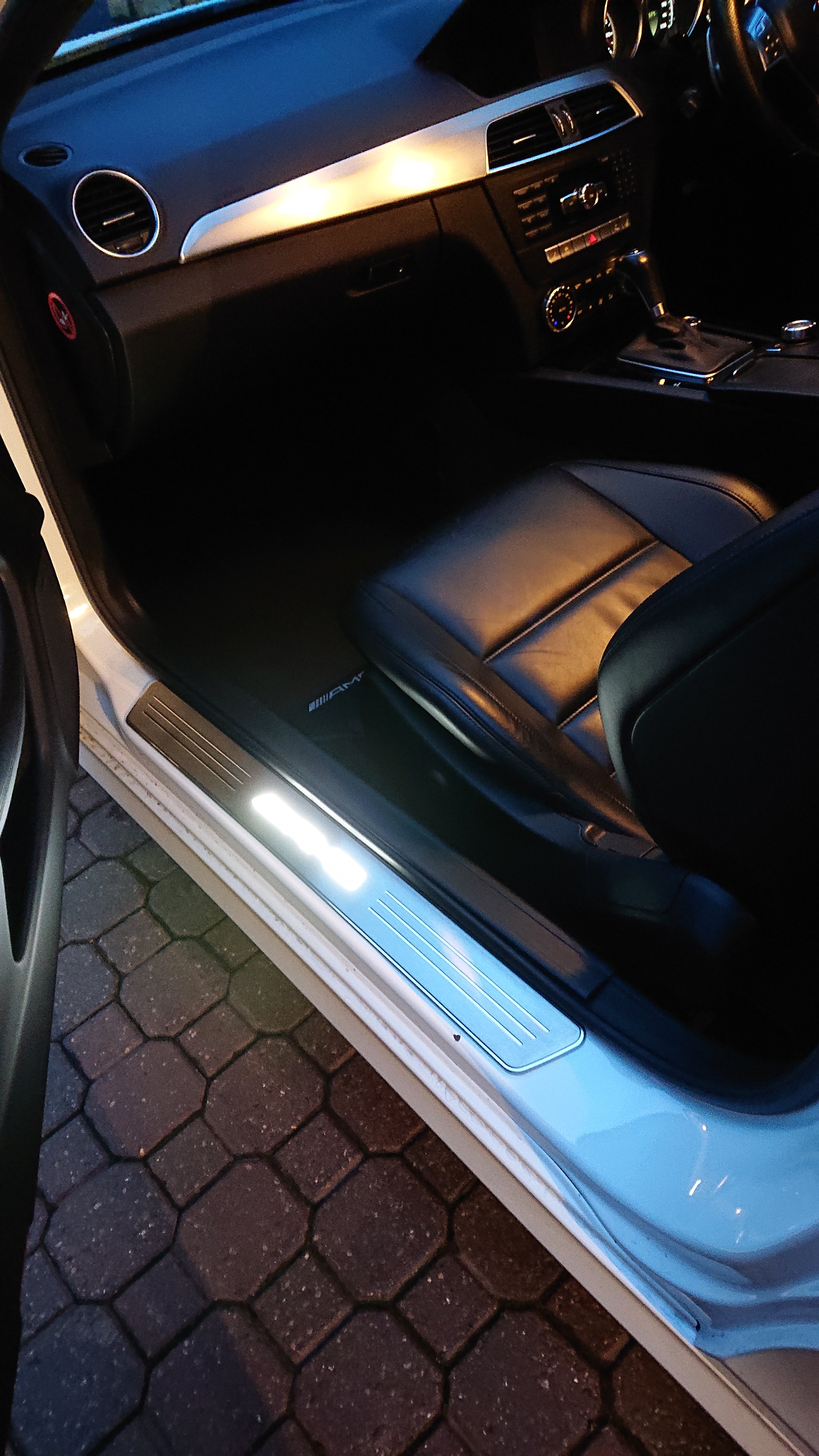 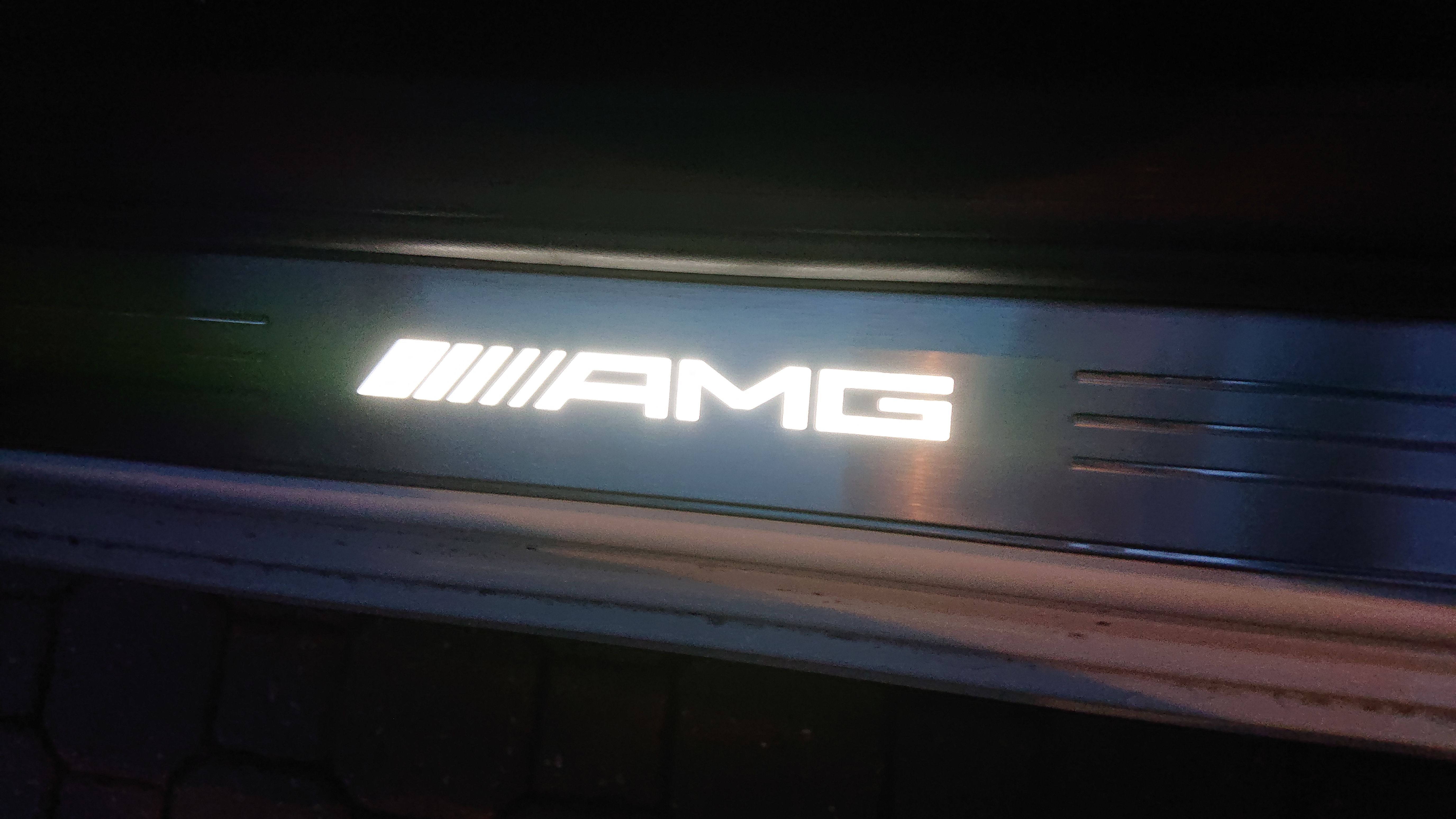 Very happy, simple fit and look very coo especially at night. Certainly didn't need them but its one thing off the laundry list

Look like the blue plugs have been cut off but they are only 2 wires so easily sorted.

Look like the blue plugs have been cut off but they are only 2 wires so easily sorted.
Click to expand...

Forgot to say thank you for the heads up on this, I did message the seller for some more info re the wiring but didn’t get a response, they sold for £80! Wish I jumped in at the end now

Thread revival! I have a 2014 c63. Do they all come pre wired or does the car need to have a specific option for the blue plug wire to be there?
Many thanks

kepler452b said:
Thread revival! I have a 2014 c63. Do they all come pre wired or does the car need to have a specific option for the blue plug wire to be there?
Many thanks
Click to expand...

it depends, some have the wire there and some don’t. In reading up on it and asking several other people, saloons can come prewired but not the coupe, however 507 coupes come with the wires

if you remove the plastic trim at the bottom of the door entry, pull the carpet back and if you’re lucky you’ll find wiring with a blue connector either tucked away or taped to the chassis

Myself, I don’t have the illumination pack on my coupe so I’ll need to tap into the door module. If you’re in the same boat as me I’ll paste some links

Have you purchased OEM sills? Cheapest I can find them is €230 or so euros each (coupe) I did have some aftermarket custom sills made, same AMG logo however due to the lighting module inside, the logo is a lot lower on the sill compared to the real deal. Yet to connect these still obviously, pictured below 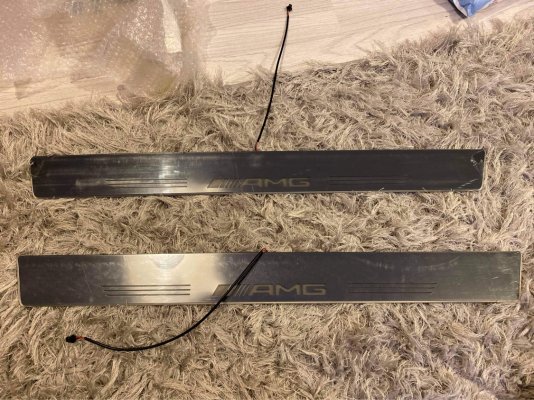 My coupe is specced with them

more sleepless nights for me searching and comparing on eBay.... why, oh why did you have to start this thread....

I have recently carried out a retrofit of the illuminated cills on my facelift S212.
I purchased the cills from USA a year or 2 ago, brand new, both fronts for about £70 (from memory) but with no wiring harness. I will make one I thought.
Finished all my other "projects" and thought I would have another look.
The MB illuminated cills don't run on 12v, the use an inverter to up the power to about 115v, so I set about finding an MB loom with the inverter built in.
Nothing available used, nothing new, here or from Germany, so I set an ebay search and waited. A month later up pops an item - LED headlight ballast loom for a A204. I looked at the specs and it was EXACTLY the loom for the cills - 2 were available and so I bought both (thinking I needed 1 either side) but 1 loom feeds both sides SO I HAVE ONE LOOM SPARE AND FOR SALE).
Fitting was simple, a bit of carpet pulling, with the hardest bit being finding a source for a constant live.
Nice thing is, the "switch" is triggered by the foot well ambient lamp, so after 5 minutes, if your door is open, the cills turn off the same as the foot well lamps, to preserve your battery.
Took me about 2 hours all in (but I am retentive about it looking OEM).
I even have the PDF for fitting the loom should you want/need it and want to buy my loom

By the sound of it, aftermarket sills with standard 12V LEDs might be the easier option... assuming they look OEM and not naff.

BTW, if the sill illumination is triggered with the footwell lights, then this means that on cars where these features were optional, they will need to activated via STAR (on my W204 the footwear light is part of the Luxury Pack that needs to be activated so that the SAM knows about it).
You must log in or register to reply here.