Why did Estate cars get originally called as such?

Charles Morgan's fascinating thread on Mercedes brochures contained this Renault 4, described as an estate car that we'd probably call a hatchback now , but it got me curious about the Estate name.

Were they were originally for landed gentry for driving around their estates? Or was there another reason? And which were the first estate cars in Britain?

Answers on a postcard please 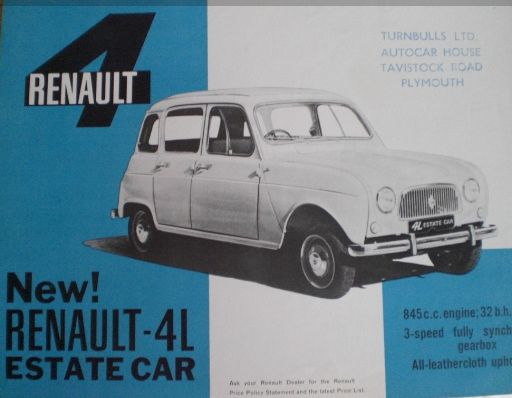 Yes, the "estate car" is one that was typically used for country estates, on such tasks as collecting guests and their luggage from the railway station (hence also "station wagon").

Although the first recorded use of "estate car" seems to be from 1948, the body style existed earlier, as a "shooting brake". In that role, the landed gentry and guests would be on board, needing the space for guns, hampers, and piles of unfortunate birds, etc.

The Daily Mail did an article titled "The World's first Estate Car?" in 2012, when a 1928 Rolls-Royce came up at Bonhams, but when you read carefully, that one was converted from limousine to woodie in 1939, for use by the RAF. Shooting brakes certainly existed before that. And how are we to believe the article when it includes the line "They then welded on the wooden section to the original chasis creating a large carriage in the back". (The secret Rolls-Royce skill of welding wood, known only to journalists who can't spell chassis?)

Thank you Gr1nch & CabrioDave. As the owner of three estate cars, I have never thought to ask this. Now I know, I am prepared for the question ;^)

I suspect some marketing department many years ago invented these names to appeal to the aspirational, without any real historical background.

A bit like the Ploughman's Lunch, which was coined by the Cheese Bureau / J Walter Thompson advertising company in the early 50s.

Well my goodness! Station Wagon came from out the back of Australia for use on Sheep and Cattle Stations. People of note in the UK would have had their belongings delivered by Lorry - yes...?

Charles Morgan said:
I suspect some marketing department many years ago invented these names to appeal to the aspirational, without any real historical background.

A bit like the Ploughman's Lunch, which was coined by the Cheese Bureau / J Walter Thompson advertising company in the early 50s.
Click to expand...

Imagine telling folk you work for "The cheese bureau"

I wonder what vision that would conjure?
C

WDB124066 said:
Well my goodness! Station Wagon came from out the back of Australia for use on Sheep and Cattle Stations. People of note in the UK would have had their belongings delivered by Lorry - yes...?
Click to expand...

Sounds sensible, but the term "station wagon" was used even before we had cars. The name was used for the horse-drawn covered wagons taking people, or goods, from the railway stations, but I can't see that a wagon used on a sheep etc station would need a name other than "wagon".

Orr crickey Dave some parts of Australia still use horse and cart. I'll let you guess where they are....

Wasn't the Renault 4 regarded as the first hatchback?

Nope. I've tried hard but I can't think how that got its name ...

brucemillar said:
....and what of the "Shagging Wagon"?
Click to expand...

Thanks,thats why Mercedes substitutes the W as in W205 to S for the S205
estate.

Also, why is a "saloon" car so named?

I remember when I first joined Fords at Dagenham,we used to have a couple of Mk 1 Cortina Estates,they had this fake woodwork attached to the sides,they were built before I was involved,the Mk 2 was being produced at that time,the estates were used to ferry around various things and as such they used to get a certain amount of damage,but the fake woodwork was always pristine as there were hundreds of sets that were never used and so as they were damaged they were replaced , it was not a popular extra,if I remember they were all made by DuPont they cost a lot in those days,when the cortinas were scrapped we burnt all the fake wood down at Frog Island,it made for a great day out in the sunshine with a view of the Thames,then back to the classroom.
C

From "saloon" (also seen as "salon") which is a room, often of a more luxurious style, for receiving guests.

.. cos they're full of drunk cowboys

The Renault 4 was an Estate car because Estate cars were used on the Estate. Which definitely isn't about "landed gentry," it's about land - think smallholding or farming. So there was a need to have a car which could be driven around on the estate, moving people and stuff. (I saw an R4 being used for this in Provence when I saw a shepherd going about his business - complete with a bloodied sheep with her new baby in the back.)

Station wagons were the creation of the 19th century rail network. Originally horse pulled wagons, then motorised trucks, then boxy cars, they were all about moving luggage and passengers between the station and their destination. The American car industry grabbed the idea in the 50's and extended it into the family wagon for routine suburban work.

Shooting brakes were for country pursuits, including shooting and fishing, and are all about moving people and their sports kit to wherever they need to be. That can be both the sportsmen and their support staff (ghillies, beaters, or footmen). The word brake comes from a kind of carriage that was originally used to train horses. Which is all a long way from the Bentley Bentayga Fly Fishing by Mulliner:
http://www.bentleymotors.com/en/wor...aunches-bentayga-fly-fishing-by-mulliner.html

Saloon cars got their name in the twenties when cars became enclosed. They described a three box vehicle that was airy and luxurious like a Saloon (from the French "Salon," not the Saloon at the Dog and Duck)

SUV's ? They meet no need. They were invented to avoid Gas Guzzler taxes in the USA in the 1970's - by being classified as "trucks" they avoided taxes and limits on car production numbers.

brucemillar said:
....and what of the "Shagging Wagon"?
Click to expand...

I always thought that the above term referred to a vehicle with fully reclining seats, that could be turned into a bed, such as on a Triumph 2000. or 2.5

A vehicle with bench seats and 3 speed column change, such as an old Vauxhall Victor might give you some sort of privacy if you were "busy " in the back and your mate might be "busy " in the front.

The term "Passion Wagon " could be applied to any vehicle that could accommodate nocturnal activities in a farmers field.
Such a vehicle may also have been seen with a sticker on the back saying ""Don't Laugh Your Daughter Might Be In The Back ""

Dear Boy I think you have it all there. Thank you.

That is with the exception of the "Passion Wagon". I believe, this was a vehicle, who's sole purpose was the same as the more affordable and more common "Shagging Wagon".
The Passion Wagon (still seen today) was actually created with one purpose in mind. It's aim, was to entice members of the opposite sex into it's fetid rear confines. These would normally be furnished with a mattress that smelt like a damp labrador. The exterior could be noted by it's blacked out windows, including plastic bubble rear windows, rear wheel arch extensions, and a chrome fan mounted in the middle of the dashboard.

The rear number-plate would carry a logo "don't laugh your daughter is inside" and the stereo would have had the volume control super-glued on number 11. Most were sprayed with rattle cans giving them a distinctive DIY patina (a skill that has been handed down to lot's of small hatchback owners). The more upmarket jobs would be painted with flip-paint in candy colours assuring their owners, the pick of the birds at most music festivals.
Last edited: Jan 14, 2017
You must log in or register to reply here.