A while ago I posted this thread - SL350 (facelift) Comand NTG2.5 replacement | Electronics and Audio
It covers the basics of mapping the SL's quadlock connector to the ISO fitting.

The car is an R230, facelift model, which means the internal fascia is a little different. The OEM head unit was the NTG2.5 and the audio is not amplified (so doesn't need MOST integration).
The head unit is an Alpine ILX-F903D, 9in display. They do a larger 11in system now, but I don't think that would fit (would look too big and cover the vents), with this system, the vents aren't covered and I can still use the cup holder (just!)

The main issue with attempting this, is that aftermarket integration kits wrongly assume that the SL (NTG2.5) will work with the same kit as the SLK (Audio 20). Whilst the connector is the same (Quadlock) it is wired completely differently.

I found this thread: All you wanted to know about Comand APS NTG 2.5 | Electronics and Audio really helpful in reverse engineering what I would need for the Quadlock connector.
TL;DR the pinout chart is essential reference 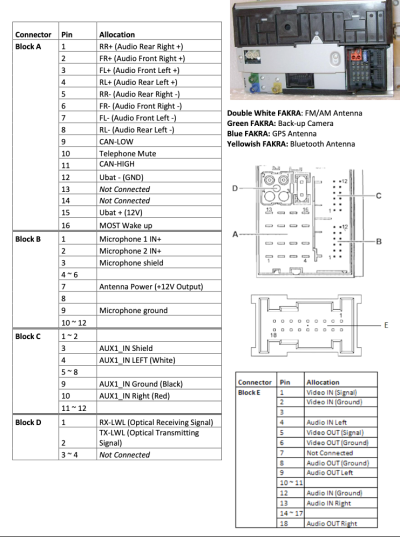 However, let's take a step back - this is a problem that can be broken down into a number of parts:
Fascia integration - originally I was recommended this: Connects2 CT23MB11 - Mercedes SL 2001-2011 R230 Double Din Fascia Panel Kit
as I was replacing with a single DIN unit, I also got a one of these CT24UV10 Universal Fascia Adapter Panel Plate Single Din Black Pocket 90mm
and didn't use the double din cradle, but replaced with the single din cradle that came with the head unit.
All of this required a bit of work to secure everything properly, including creating tab holes in the facia backing to accept the single din adapter, removing mounting tabs from the fascia that weren't needed and adding tabs where they were needed.

Power and speaker
I purchased a quadlock to quadlock connector block, and cut in half.
The ISO connector came in the kit for the Steering Wheel Control (SWC). I basically went through each speaker connection and soldered to the associate ISO wire, before insulating and wrapping. Tip: I painstakingly went through each wire and added a label, both for the ISO block and the Quadlock block. This was really handy. I tested all soldering with a continuity test.

I also wired the ANT Power (Antenna?) back to the Ant Power cable from the head unit. Not sure exactly what this does, but thought it might power head unit accessories.

Acc Power and SWC
So you don't get Accesory power from the quadlock. There are simple methods for doing this, but quite often you should find it comes via the SWC, which is what I had in this case.

Originally I'd purchased a Connects2 system for SWC, but couldn't get it to work. I had previously got it working in an SLK, but no luck in the SL. The issue I have with the connects2 system is there is no way to tell what the problem is. In the end I just bought a basic ControlPro system from Halfords for £30, it was for Citroen and Peugeot, but the unit itself is generic and I wanted the ISO connector it came with.
The ControlPro unit has an LED which can be used to determine state, and can be programmed using DIP switches. It also supports a "learning mode" if all else fails.
The mistake I made was not getting one that came wired up with parking break, speed pulse, reverse and illumination - may be I'll sort in the future, but it's not really a concern at the moment. 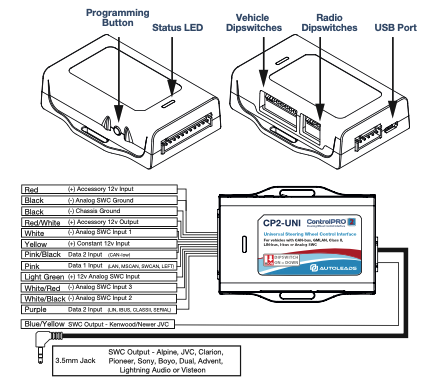 Connections:
To set the dip switches I used the ControlPro app (various official sources on internet seem to contradict, but this from their app worked) 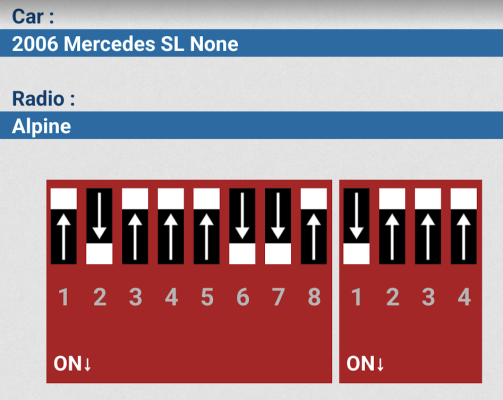 When I tested, I could see the LED flash green when I clicked the volume up/down on the steering wheel, so I knew I was good. If not right, you get red or amber LEDs.

Car Integration
As mentioned, I think I can get the ControlPro to provide speed pulse, illumination, etc, but don't have the right cable. Either way I am not too bothered about that.

What I did want to do was to be able to use the car's built in mics and its built in GPS.
The mic - OK so Alpine provide a mic that you can install, but why use a horrible aftermarket mic when the car has them built in?
The issue is that the mic jack is NONE-STANDARD.
It's a 3.5mm "stereo" jack, normally the base is gnd, ring is right and tip is left.
I had to wire this to what was coming from the quadlock connector, which you may notice has a ground and a shield, and there are two mics.
This is what I wired to, and it does work:
GPS
The car as a fakra connector for GPS, so I purchased an adapter to convert this to the fitting in the Alpine (if anyone knows what that's called...?)

Conclusion
All buttoned up, looks great - the reason I went for the Alpine was that the floating design looks very "Merc"-like and fits well within the cabin. I was also able to customise the startup screen, so that is now the Mercedes logo. 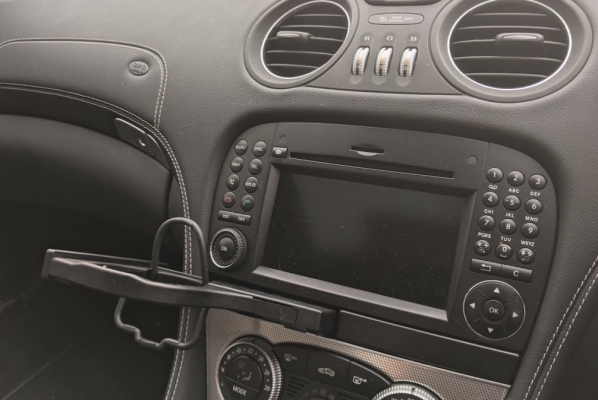 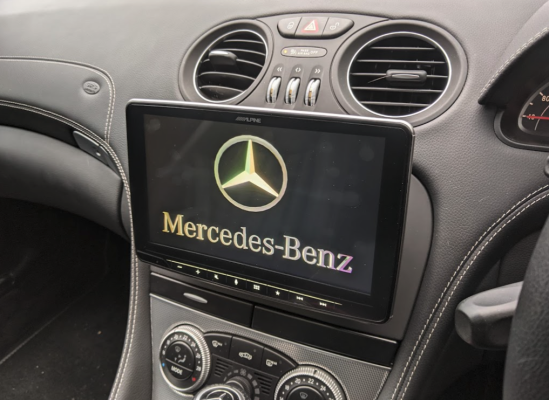