As in an engine transplant spoils the 'purity' of the original?

Find many great new & used options and get the best deals for Mercedes C43 AMG at the best online prices at eBay! Free delivery for many products!
www.ebay.co.uk
OP
OP
S

jukie said:
As in an engine transplant spoils the 'purity' of the original?
Click to expand...

We love a good wagon - This picture was taken this weekend in Runnymede. 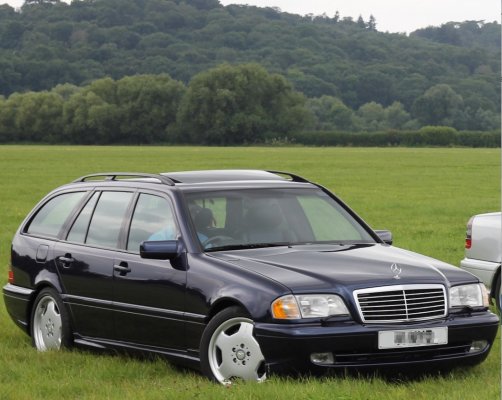 Koolvin said:
We love a good wagon - This picture was taken this weekend in Runnymede.

Koolvin said:
We love a good wagon - This picture was taken this weekend in Runnymede.

jukie said:
That looks in good order
Click to expand...

Had a full resto it is pretty much immaculate.

I've just spoken to the seller about this as I've always really liked them. I tried to buy a C36 when I was in my early 20's and that was an insurance no no. I'm older now so that helps.

As it's an hour drive from me I decided to put myself in front of it, it's £6595 now (well today judging by what I am reading on here) and having discussed the paintwork it's been through as well as some welding I'm intrigued to see what it is really like. The bonnet shut lines don't look quire right in his video but as that's been painted and new wings fitted it could be a bit of adjustment. I haven't HPId the car as he's a trader and I won't be driving it home tomorrow anyway. It's a fact finding mission, he's interested in my CLK so I'm keen to see how that conversation goes too If it looks like it could be a good bet, I'll do some serious due diligence at that point.

The keen eyed among you may spot that I posted about an R129 just a few days ago so, not wanting to appear as one of those who perpetually bugs forum users about cars and never actually buys one I'd like to address that now. I love the R129 and I would really like one I think but having been casually looking for more than a year it seems that finding what I want is going to be tricky and I probably need to up my budget to the high teens to get what I want. I'm not against doing that but I need to be sure.

Here's the car again. At this money it looks cheap (usually there is a good reason for that!) but the prices on these are all over the place. There is one not far from me for around £9k but that again has been advertised for ages so that tells me it's a bit strong on the money currently.
1998 Mercedes W202 C43 AMG | Stunning | MOT | Just Serviced | FSH | eBay

By all means, everyone wade in again I'm always keen to hear the experiences or thoughts from those that own or have owned them.

I went, I viewed, I left.
Having agreed with the seller that we would discuss the PX of my CLK, I refused to discuss money until I'd seen the C43. I knew I'd get low-balled on the CLK, he's a trader and that's ok, they have to make money but my thinking was that I'd just keep the CLK and buy the C43 rather than trade it in as I could knock it out cheap if I wanted to and still be in the same position.
On arrival we swapped keys so that we could view each other's cars. 6 minutes later I asked for my keys back and I was driving away in under 10 minutes. My words "I'm sorry, this car is simply not good enough" The guy looked mortally wounded; I think it was the realisation of what he's got there and the fact that it's not a very cheap 23 year old Mercedes, it's an AMG and anyone looking for one knows exactly what they want from one.

I need to make it clear that I am not going slate the guy, he told me on the phone that he had put new wings on it and had them painted as well as attending to lacquer peel on the roof and the boot. I don't think he wanted to hide anything from me and I'm not entirely convinced he is fully aware of what he has there.

For the benefit of anyone thinking of viewing this car, here's what I found in just a few minutes:
Continental tyres up front, General (?) on the rear, wheels need a refurb but that is evident in the advert.
Cold start: The absolute faintest puff of smoke (almost not worth a mention) and that V8 sounded beautiful, not a tick or rattle, it simply burst into life on fast idle and calmed within about 90 seconds at a guess, smooth idle and great throttle response in fact more snappy than I expected for a V8.
It has two keys.
There is service history but I didn't bother to look at it.
Front bumper - unsure if it is genuine personally. It is clean in the back of it but the paintwork isn't of the quality where you'd expect them to have cleaned it out to the degree, I can't be sure.
Headlamps look like new.
Bonnet and wings, dull slightly flat paint slightly off shade, enough to notice.
All new paint work has fish-eyes or evidence of silicones in it.
Roof, dull - Mobile phone aerial drilled through it
Boot lid - painted over some corrosion around the handle numberplate light trim
OSR 1/4 painted, hard edge paint line inside the rear door shut
Plastic side skirts not removed for paint, evidence of rust can be seen through the gaps - seller told me it had been welded and the MOT history would agree but it was a shame this wasn't done properly.
Leather - very dirty but would clean up, no major damage.
O/S C pillar trim cloth coming away.
BAS, ESP lights lit.
in the boot - strong smell of damp, N/S tail light leaking and wet below it.
O/S chassis rail blown out with rust, clearly not surface corrosion
Battery tray- surface corrosion
Spare wheel present, tool kit not fixed down
Parking brake hugely over adjusted, I could only get 1 click with my massive feet, seemed to release with a good snap.

Overall, it went pretty much the way I expected it to but as so often is the way, I secretly hoped this was one that everyone had overlooked and wanted a bargain.

The sound from the engine/exhaust was beautiful and as much as I'd really have liked to try it out, I wasn't going to waste his time, it wouldn't be fair.

It wasn't a waste of 3 hours but it wasn't the success I'd hoped for. C'est la vie.

They do make a good noise , this is my old estate on a quick drive to my old house...

Wagon said:
They do make a good noise , this is my old estate on a quick drive to my old house...

Well that doesn't make me want one any less!
O

Find many great new & used options and get the best deals for Mercedes C43 AMG at the best online prices at eBay! Free delivery for many products!
www.ebay.co.uk
Click to expand... 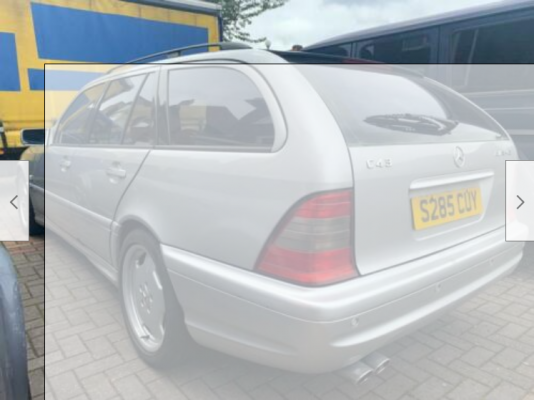 Find many great new & used options and get the best deals for Mercedes c43 amg w202 at the best online prices at eBay! Free delivery for many products!
www.ebay.co.uk
You must log in or register to reply here.