Ninjacj said:
Sorry to hijack this thread but unable to PM you, are you still selling this, and how much, and just wondering the reason for removing it?

I'm quite happy being old school with my CD's, but the phone function is tempting. I have a Viseeoo which works well itself, but my car seems to regularly do the "NO PHONE" trick that I've read about, and getting bored of unplugging and resetting the Nokia module now. (its not the batteries before anyone says, both are new. I have a slight suspicion it may be linked to using the trickle charger but I've not pinpointed it, and it seems a fairly common random occurrence from what I have read?)
Click to expand...

This was found connected when I went to have the NTG2.5 fitted. Not sure where the fibre cables went or if had any, In the glove box is also a 6 disc changer.
I don't know if it works? But if you can PM me then we'll go from there.

Well, the cheapo-cheapo Chinese 'Shenzhen Special' Bluetooth/USB/SD player unit didn't work. In fact, I tried two, though I think from the same supplier with two eBay accounts; both had imperfect software. Perhaps it's not as easy to clone/rip off the Dension programming as it is the hardware? That's four pieces of Chinese electronic tat I've bought in the last few months, and none of it worked properly; it was worth a try, but I won't bother again.

On the plus side, the fitting was an absolute doddle, so good experience.

Both have gone back (UK address, or I'd not have bought them), and I've done what I should have done before; bought a genuine Dension. I rather expect that will work.

I hadn't seen this thread before. I have a dension unit in my car and I plug the phone with a 30pin to lightning cable converter in the centre console. It doesn't display song titles, but it replaces the six cd changer and is controllable through the steering wheel.

It recently suffered a failure, whereby the sound only came though the drivers side of the car. We nad to switch the sound into the little box as pictured in post #6 'photo 3' and it has lost some functionality in that the initial volume is very low and it doesn't pause the music when functions are switched away eg when taking a phone call. I'd be very interested in the upgraded GW52MO2 as you mentioned; I know someone in Watford that is great at fitting these too.

As mine bypasses the six CD changer, I infer that I must have the GW52MO1. I like the idea of the DAB functionality, too.

andy27168 said:
Hi
That looks almost identical to the Dension single FOTC unit.
After this thread I bought the Dension unit and the DAB Unit and I must say it works flawlessly and I thought the DAB would suffer from reception issues as I only fitted a windscreen aerial but so far has been perfect
Click to expand...

Can you offer more details on the part numbers and cost of supply/fitting?

bolidemichael said:
Can you offer more details on the part numbers and cost of supply/fitting?
Click to expand...

Hi,
I bought the Denison with the twin FOTC to retain the use of the CD Changer, I bought it from a seller on E-Bay, really quick delivery to. 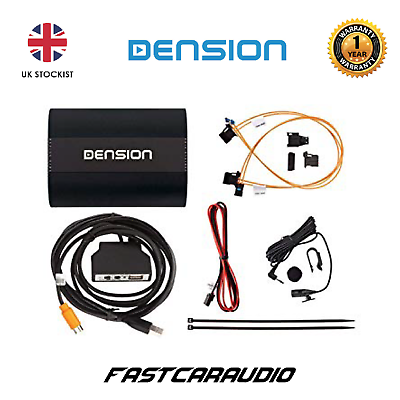 Find many great new & used options and get the best deals for DENSION GATEWAY 500SBT IPHONE IPOD AUX USB BLUETOOTH MUSIC STREAMING ADAPTOR at the best online prices at eBay! Free delivery for many products!
www.ebay.co.uk
The DAB Unit I bought from Command, it comes with a free antenna, IIRC it was £150.
Fitting wise I did this myself, reasonably straight forward there are several utube videos detailing the installation.
Initially I tried putting the Dension unit behind the head unit but when I fitted the DAB Unit I moved it to under the glove box, behind the lower dash trim much neater and easier to install there.
I also tried to put the USB hub in the Ash tray, which again I moved when installing the DAB Unit to the glove box.
If you were to pay someone to fit it, then I would say three hours labour (2 hours for the main unit, 1 hour for the DAB and Antenna) to do both by someone use to taking apart a Mercedes possibly add an hour by someone less conversant.
I would offer to do it for you for some beer tokens if wasn't for the lockdown

R
Can an Audio 20 Radio (with CD Changer) connect to a Harman Kardon amp (with 12 speakers)?