Larkone said:
This has everything to do with marketing and little to do with reality - they will always quote the absolute max they have achieved on one particular car because they want to attract you to them and away from their competitors. Whether it is repeatable over all similar engined cars is another matter. Whether it creates a car that is over-stressed or has a poor power delivery is not relevant either when it comes to the 'marketing message'.
Click to expand...

There are some that do the opposite and quote minimum gains . 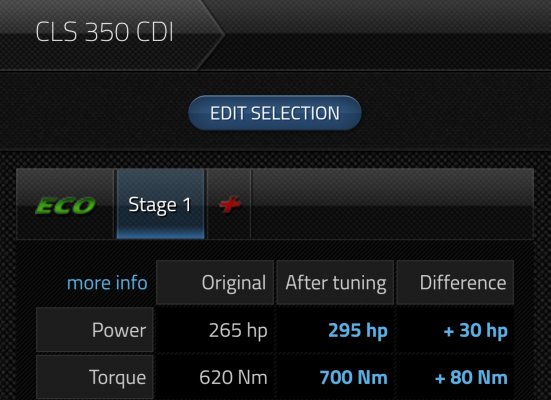 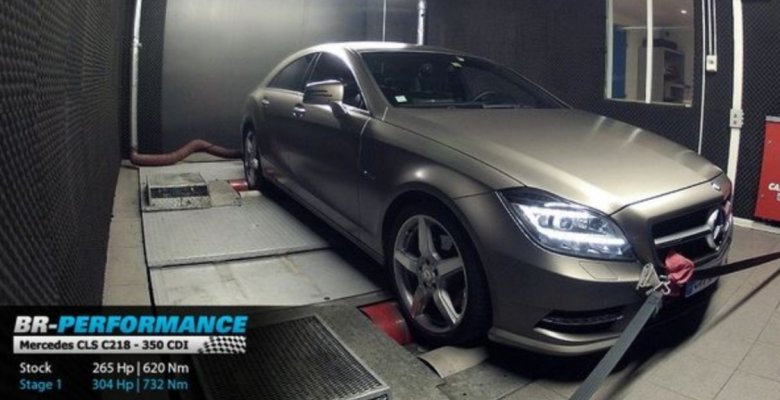 E55BOF said:
I'd put tuning boxes and 'generic' remaps in the same category, more or less.
Click to expand...

Couldn't be more different , I've had some fantastic generics from one on a 1.9 PD that gave nearly 50 bhp and totally changed the shape of the torque curve to a linear table top which stopped the first stages of clutch slip .


Then some generics that give the same promised results as custom at less than half the price .
E

Same sort of ballpark figures as the other reputable tuners. Big Fish, who do/did the MB V6 diesel maps for MSL, reckon that 330 hp is about the limit for the OM642 without hardware changes.
E

Gazwould said:
Couldn't be more different , I've had some fantastic generics from one on a 1.9 PD that gave nearly 50 bhp and totally changed the shape of the torque curve to a linear table top which stopped the first stages of clutch slip .
Then some generics that give the same promised results as custom at less than half the price .
Click to expand...

I'd not want anything other than a custom remap from a top tuning firm now. You may hit lucky with a cheaper product, but you can be fairly sure that a tune from, say, MSL or GAD will be the real deal.

It's all about research , one was a forum recommendation that many members had , actually a reworked UPsolute that doesn't even appear on their website , I didn't have it dyno'd till 9 months later on a club dyno day .

The other is a guy with a dyno on his home premises such is his commitment .
Who also prepares club race cars and is responsible for the Ariel Atom ecu software development .

GAD quote 36 bhp and 50 Nm , I got the hp but way more torque so I'm not sure about what real deal I'm missing out on except for a lighter wallet .
E

I've never heard of UPsolute. I've had two TDI boxes on diesels, one on the old S211 which was good, one on the 2014 S212 OM642 which was disappointing. I have a Celtic remap (cheap 'n cheerful) on the SLK which doesn't feel much different, but as it's an N/A M113 I didn't expect it would. The CLS 350 has an MSL/Big Fish remap on it, and it is excellent; streets ahead of the S212 tuning box on the same engine.

Generally speaking, you get what you pay for. I'd stick to remaps by established top tuners, thanks; my wallet could stand any lightening necessary.

A European top tuner in Austria like BR Performance in Flanders , these tuning houses are sometimes amongst the first to write a remap for newer cars .
E

I don't doubt it, but I'd never heard of BR Performance either.
OP
OP

Aidroos said:
How much did you pay for the saab remap?
Click to expand...

£200 from OBD Remaps Bristol.
You must log in or register to reply here.