There is no need as the warning light gets tested every time the ignition is turned on.

At one time alternator charging circuits were simple and all much the same in principle and the function of the alternator light was more widely known.

When the ignition is turned on, battery voltage is applied to the right hand side of the alternator light and a current of typically 0.25 Amps flows via the voltage regulator to the rotor and then to earth. This provides the rotor excitation without which the alternator will not produce an output.

When the engine starts the battery receives it's charging voltage via the main diode pack and auxiliary diodes provide the same voltage to D+ on the voltage regulator. The alternator light now has the same voltage on both sides therefore no current flows and the lamp goes out.

If it doesn't illuminate when the ignition is turned on then either the bulb has failed, there is a wiring fault, the rotor has gone open circuit or the rotor brushes have failed. Whatever the cause no excitation current will flow and the alternator will produce no output.

If the light comes on while driving then there are the same possible causes with the addition in a car of the alternator drive belt having failed. The wiring diagram happens to be for old BMW motorcycles with a direct drive alternator but as I said they were all much the same in principle.

Bulb failure is actually very rare as it's always under driven due to some of the voltage being dropped across the 3.4 ohms of the rotor coils, thus it never sees full battery voltage which greatly extends it's life. The one in my motorcycle is the 43 year old original. 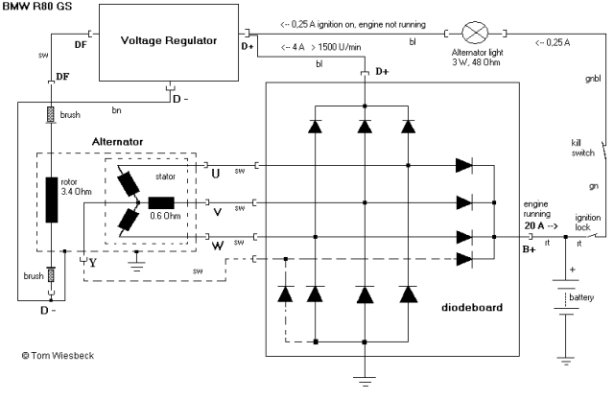 Everyday really is a school day! Informative read
You must log in or register to reply here.