Pontoneer said:
I put keep it original , but it depends what you mean by a Classic Car .

To me , a Classic is something rare and collect able from the 50's or 60's - hence I wouldn't modify a Ponton or Fintail . I might do a colour change , but it would have to be from the original range , similarly I may put radial tyres on in place of cross plies ( in many cases you can get radial replacements in the same sizes ) , could put a stainless exhaust system on to replace a rusty mild steel one . However the car would be kept as close as practical to original spec , so nothing that wouldn't have been available on it when new .

On the other hand , I don't quite look at a W123 , W124 or W126 in the same way . Firstly , there are still loads of them around and secondly , there was a lot of modification done to them when new in a way that just wasn't done a few decades earlier , so with these cars almost anything goes .
Click to expand...

I think any modification to keep it safe and/or roadworthy is good if it is in keeping with the type/age of the cars.

As for new cars, my C63 is completely as is left the factory - even factory tyres and running labels in place. Give it 20 years and I'll have the one to buy as all other C63's will be wrecked/ruined/old. Just look at and 1970/80 RS Escort.
P

Originality is preferred, however i ticked 'anything', as long as done correctly.

Upgrading a base model to a sport model for instance, retro-fitting additional options is fine but Im generally not fan of fitting wheels which weren't originally available on that model, of that makes sense?
D

Cars should broadly be kept as close as original as possible, but no shame in fitting a a set of 8-hole alloys on a car with Gullideckels or steels for instance.

As a compulsive petrol head, I have over the last 20 years built up a sizable collection of cars and motorcycles. All of my favourites are modified. It seems the more I like them, the more I improve & enhance them and I must admit on some of the favourites I went well overboard when I wasn't married with a family, had lots of time and such machines were more affordable back then.

My W124 300D Turb bought 6 years ago with the intention of no longer having to change family cars ever 3 years or so (& suffering depreciation), is very different to how it came from the factory, or how I bought it.
Employing used parts, hunted for over a period of years & bought cheaply when E500's were of low value and often broken for spares, it's morphed into what is essentially an original OM603 Turbo Diesel engined wide-bodied E500 inside & out.
Most of the parts are from the more powerful V8 model and as I'd expected, the car is all the better for the sum of the results.

A much more attractive looking, comfortable and capable car than when it was first built, retaining MB rock-solid integrity.
Next modification I'd like to do is a 722.6 gearbox (probably from a low mileage 2005 CL55), in order to satisfy my perversion for wanting paddle shift - since I can't have a manual transmission in a car that my wife drives predominantly, and silky smooth, fast gearchanges. After 6 years I'm running short of more things to keep improving it with.
Some will argue in terms of financial outlay to make it like this I'd make a loss if I ever sold it and they'd be absolutely right - but the reason I modified is precisely because I have no intention of ever selling it, so it's not a valid argument in this case...
My W124 is 26 years old now and still a rust-free car. My intention is to continue driving it for another 20+ years. Already it gets a lot of admiration as it drives our family of 4 around working dependently, daily. As another 20 or so years roll on, it'll be considered something increasingly interesting when seen on the roads, I daresay. Most of all, I like that it doesn't display any class of wealth. The unknown (to others) driver could be average, or wealthy - it doesn't suggest "I can afford a new car and you can't, everywhere it goes - as a top class Merc does). So at this age it's in a unique class, so to speak.

With the other vehicles I have (mostly Japanese sports models), the modifications I fitted, mostly a long time ago are similarly the best quality & design I could find at the time. Many of the parts used on them have since become discontinued & nowadays some of these most desirable bits fitted are worth considerably more than when they were available, which makes each car be more desirable as a whole than a completely standard and original one. Not least they're cars that appeal to driving enthusiasts that like purity of the experience and if enhanced & much improved regardless of cost, but concentrating on quality and refined under-stated taste, what's not to like?
I can't pretend to mean modifying cars was a good financial investment.
I'd call buying Bitcoins when they were first available, or investing in other financial instruments or precious metals, or even property - better forms of financial investment in the longer term. Cars or other large properties need to be maintained, used, have renovation, etc. all of which would diminish returns on financial outlays by comparison.

So I guess when we modify cars, it's for our own sense of triumph & enjoyment, not for the benefit of others per se.
If we avoid modifying, in order to try to preserve value then our experience & enjoyment of such cars may be diminished. I know in my own experience I've enjoyed the journeys of modifying and experiencing the differences each change makes and learnt a lot along the way.

I know most wouldn't agree, because their eye would be on the value of a vehicle - but if you'd never want to sell your modified vehicles, these things don't matter really.

Not least, when we sell our prized vehicles for which we had a particularly soft spot, the result is usually one of two outcomes:
Regret, or ultimately if we can still afford it, the whole process begins all over again - which usually leads to costs ending up higher than if we hadn't sold in the first place.
Maybe it's best to keep such things and just keep smiling as they continue to grow within our hearts and in desirability as they age and become rarer on the roads. So enjoy!

Depends on the individual car and it’s provenance and if it was to be used in modern traffic regularly.

It's easy to fit non original parts to a classic car. Sourcing or restoring original parts is a lot more difficult. Correct cars will always demand a premium when sold. Originality is everything.

Jim W said:
It's easy to fit non original parts to a classic car. Sourcing or restoring original parts is a lot more difficult. Correct cars will always demand a premium when sold. Originality is everything.
Click to expand...

Could not agree more: 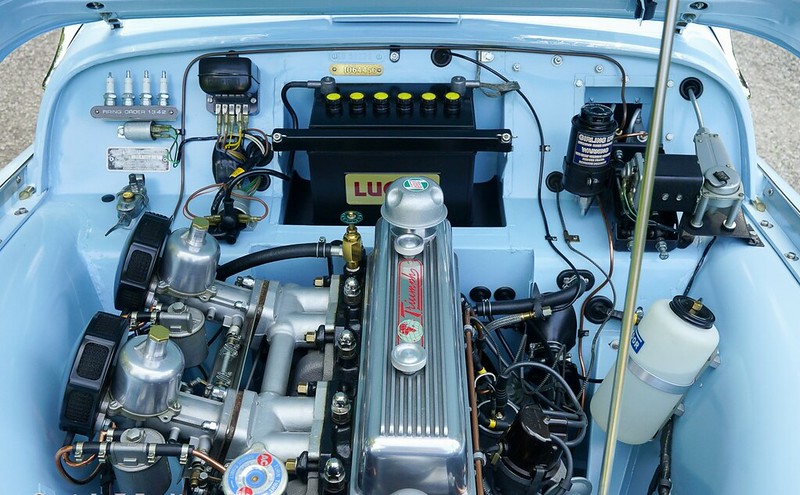 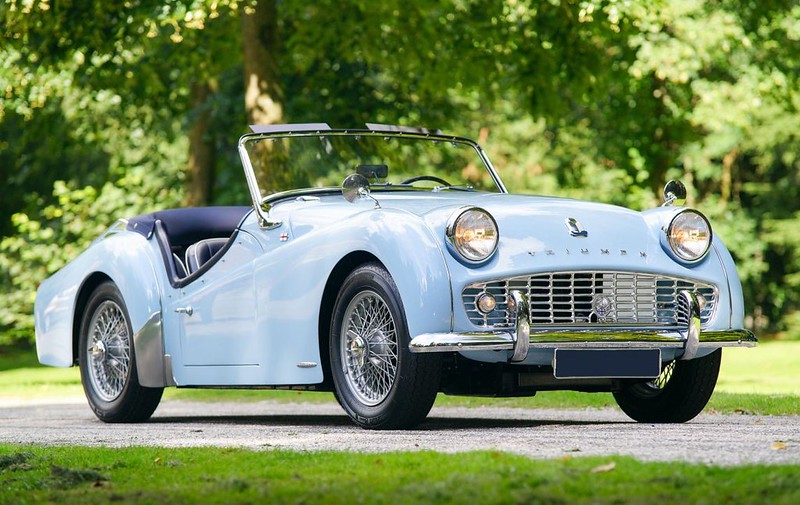 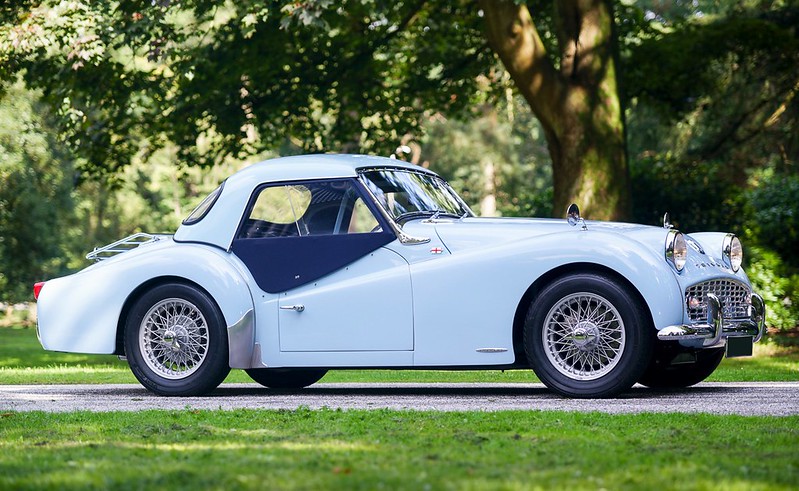 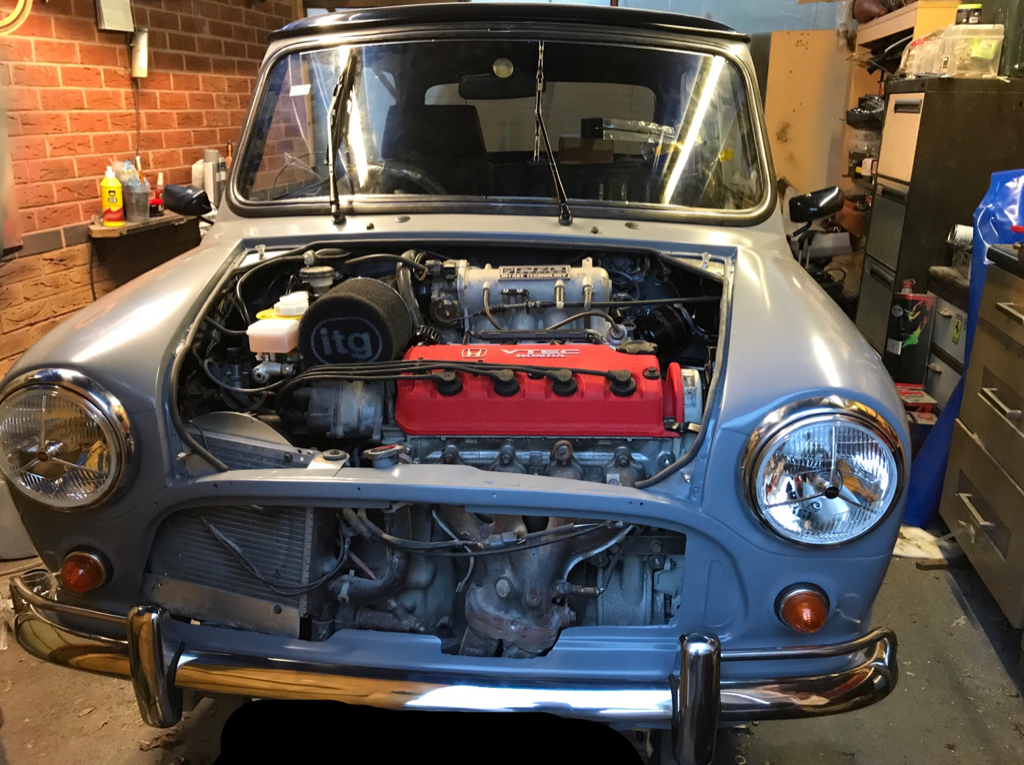 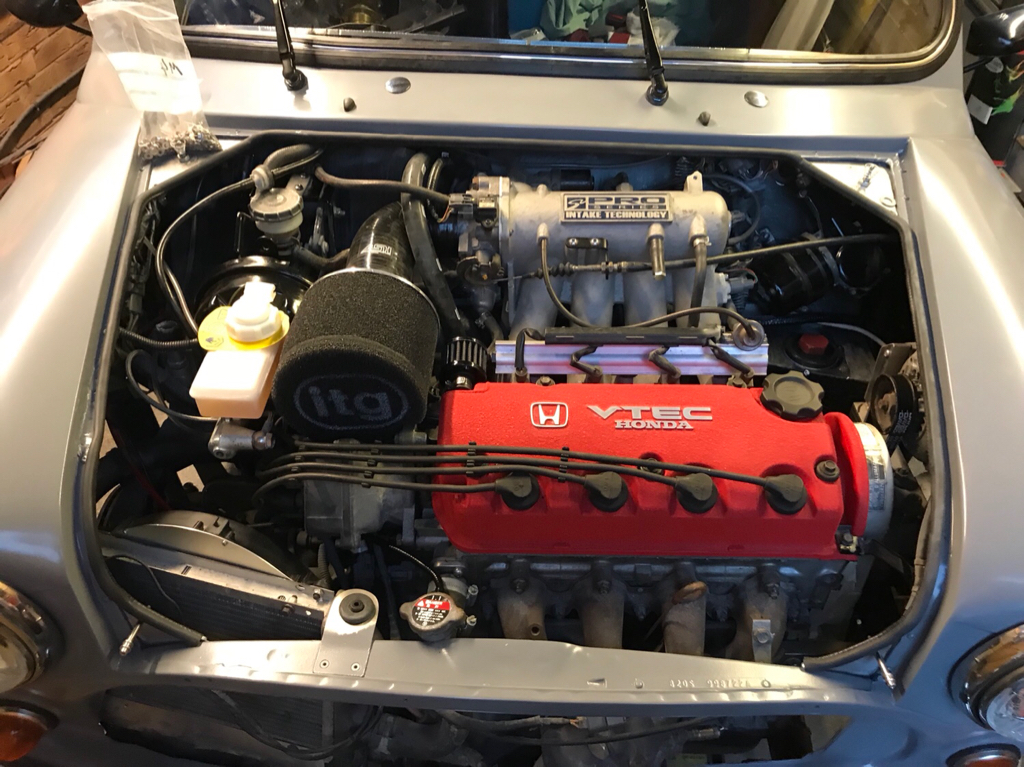 That looks like a tight squeeze! I’m all for customs too... not every car needs to be correctly restored. Back in the early 80’s I worked at a car repair garage, one of the guys flipped a Dodge Challenger on its roof and brought down a lamppost on the A40 near Ruislip. We took the 5.2 V8 and trans and installed it in a 1967 Volvo 123GT 2dr Saloon. It was a lot of work, including building a rear chassis to accommodate the narrowed Dodge rear axle. This car became his daily driver for 17 years.

My TR3a is a 40 time concours winner and is what it is, but I don't have any problems with modifying cars.

Each to his own, but an 'original' classic (if you can find one) will always attract a premium.

The important thing is to enjoy what you are driving.

It depends why you have/want a 'classic' car, really. If it's just an investment that you take to shows on a trailer, or you're looking to the resale value, keep it original. If, however, as I, you want it to use, not just to own, well, let's face it, in most cases the safety, performance, handling, roadholding, braking, soundproofing, comfort, pretty much everything in fact, is sh!t compared to a modern car, so modification can only improve it. If it matters to you that it is 'correct', good luck to you. The most important thing is that it pleases you.

It depends very much on the car. I am a big believer in 'originality is everything' in a classic car. Desirability and saleability are much greater.
A modified car is a different beast altogether.
I like modified cars, but don't modify genuine classics.

I would like to define what is a classic car? For me, to be called a classic the car should have had something going for it when it was new, Not just a boring old base model that just happens to have survived. Let's face it, we made some crap in the 60's and 70's here in the UK. Not many classics in that lot.

Just like to point out that the TR3a has covered 27,000 miles since restoration, including being driven across Europe to all of its concours events!

Takes me days to clean it after every journey though!
R

Car
Now the proud owner of an SL320

I tried to construct a post using multi-quotes but wasn't successful and so I have deleted my post - sorry,
G

Well, my MG is currently completely standard. I am considering fitting. minilite style wheels though,, and would possibly consider an electronic Ignition system, hidden within the original distributor cap, so that it can be returned to standard if later desired. Firm believer that any modifications should be easily reversible in order to keep classics as the manufacturer intended. That is what makes them a classic, after all.
You must log in or register to reply here.