Steve84N said:
@ALFAitalia I believe Bobby's experience relates to both engines in an ML which is a bit of a heavy brick. Those with the E Class or similar models do report a notable increase in mpg with the 5.5 over the 6.2.
Click to expand...

I’ve read that the E class offers improved fuel consumption, but I’m not sure how much difference the platform the engine is would really make.

The published stats are distorted by the use of stop-start in the test methods of the time, ie urban cycle 11.7 MPG versus 18.0 MPG, in the real world urban use is the same.

I’m not commenting there on official verses real world because that should never be expected to be the same as that’s not the purpose of the official test.

I am commenting on the unrealistic differences between generations though. I hope that nobody ever buys an AMG based upon published figures!

I’ve never owned consecutive versions of the other models which featured both engines - so S/CL, SL and E/CLS - so I can’t make a reliable direct comparison.

I might need to average it over a greater distance to remove variations due to cold starts and traffic, etc however the one I’m sitting in right now has managed 16.9 mpg, but that’s over 47,968 miles and 1,902:29 hours so it may not be fully representative.

This was with a washing machine, Karcher, huge heavy tool kit and steel sack barrow on board well.

Highest I've seen - would have seen 17 but hit traffic 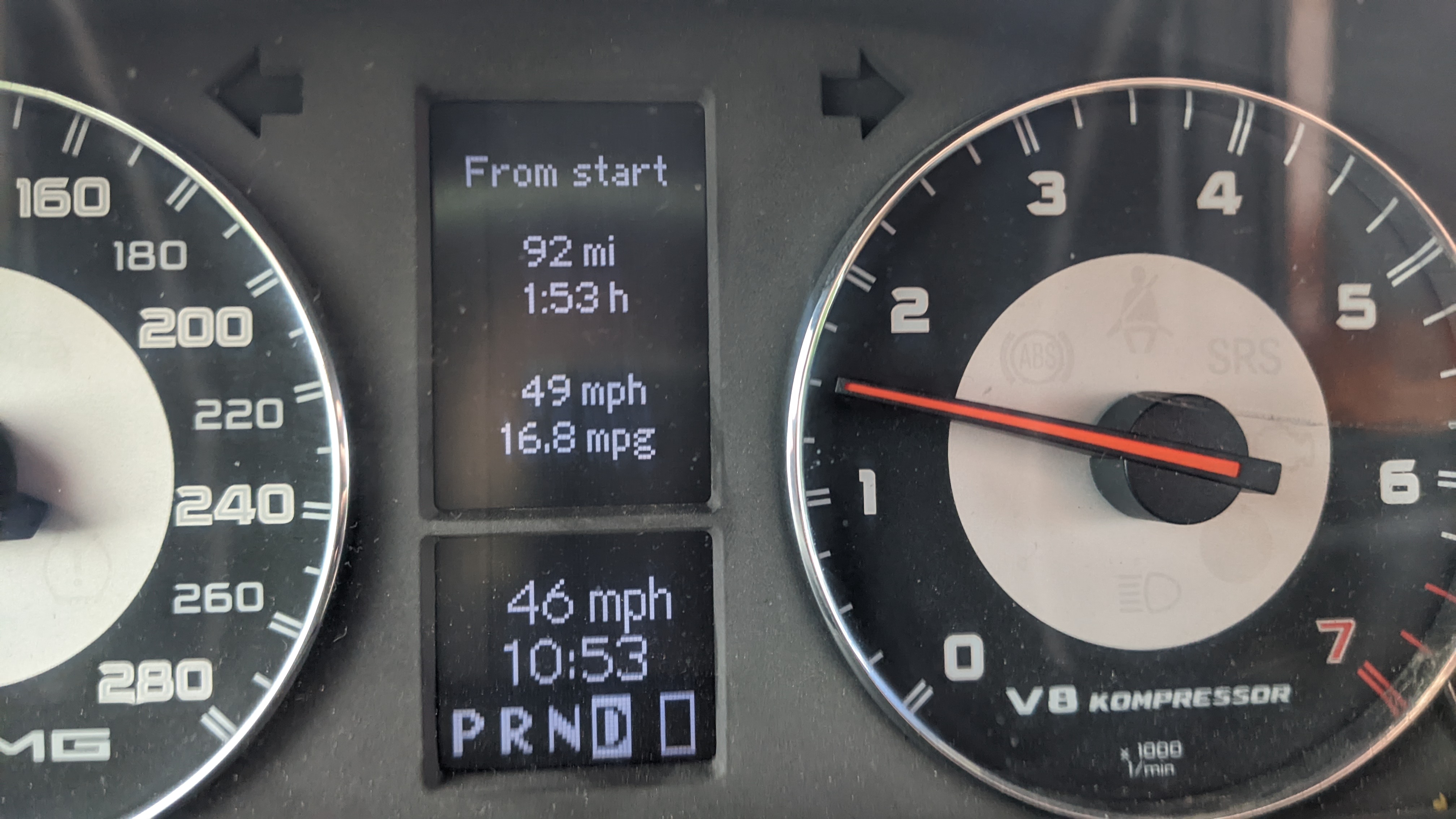 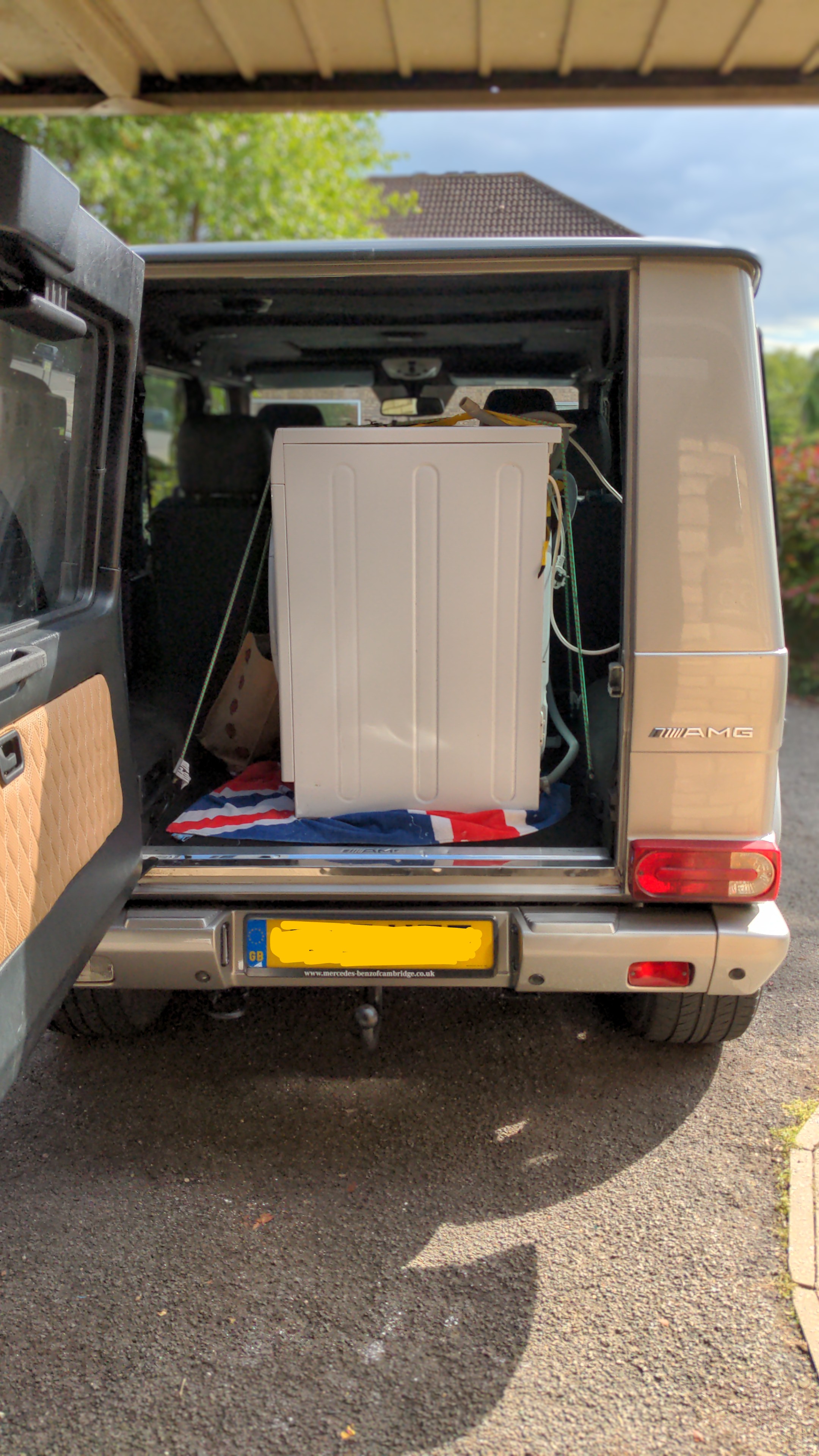 Not many AMGs which can easily carry a washing machine
Last edited: May 31, 2022
C

I doubt my SL63 could fit a washing machine, but maybe with the roof down, I got a christmas tree in the SL55 once.

Back on topic I saw 19.6 mpg over the first 200 miles of ownership in the SL63 5.5 biturbo, I have not looked again recently, that is similar to what I was getting in the SL55 which had lower power and torque.

I will have a look later to see what mpg I am getting now.

SL63Mark said:
I doubt my SL63 could fit a washing machine, but maybe with the roof down, I got a christmas tree in the SL55 once.

Back on topic I saw 19.6 mpg over the first 200 miles of ownership in the SL63 5.5 biturbo, I have not looked again recently, that is similar to what I was getting in the SL55 which had lower power and torque.

I will have a look later to see what mpg I am getting now.
Click to expand...

It doesn't get any better if its mainly local town commuting. This is my E63 after the last 12+ months.
On a decent run, you should easily see 24-29mpg. 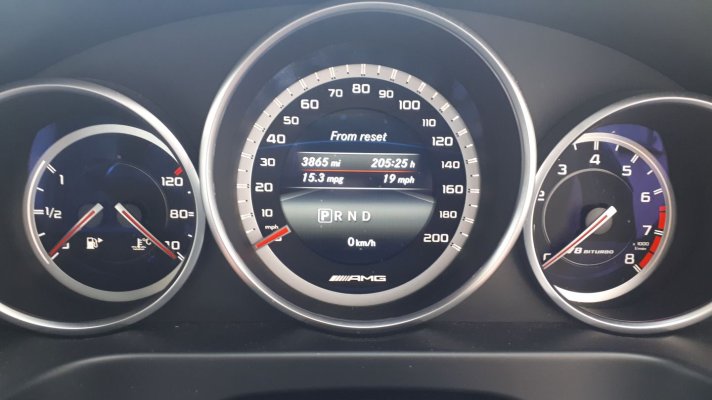 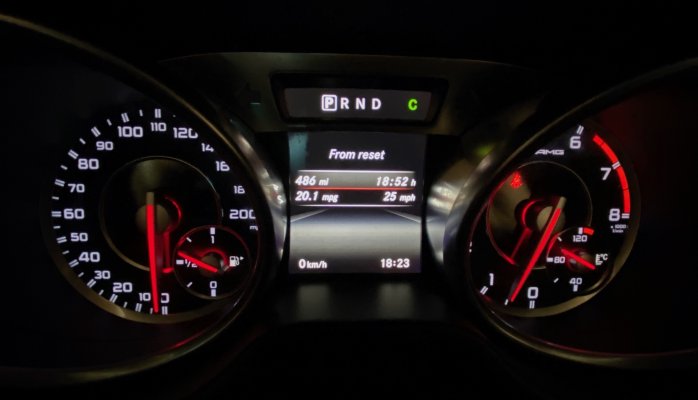 I tend to see early 20's in mine but overly a carefully driven 100 odd miles with adaptive cruise on set to 70 mph I managed to get 30.4 mpg which isnt too bad. The in-cylinder shut off really doesn't cut in as much as I'd like it to at lower speeds.

I posted this picture on the Benz on the Green thread when I got back home from that weekend: -

I thought this was a reasonable figure for a 2+ tonne car though am always a bit sceptical of dash readouts, assuming that they err on the optimistic side. Having now topped it up at the pump and confirming on Fuelly.com it seems that the on board wasn't too far out, the car averaging 32.3 over the last 227 miles.

Obviously it won't be doing this all the time though the above was on a Sunday morning, nearly all dual carriageway/motorway and I wasn't in any particular rush that morning as I didn't have much else to do.

The next trip is down to darkest Somerset next weekend which may be a bit different as I have a few bits to do on the way down.

Last week I did a roadtrip in France, and I thought I'd beat my previous best. I was however a few mpg off, but I blame that on the clogged British roads and the free flowing 130kph (~82mph) speed limit in France.

There was a tunnel that did me no favours, but it was totally worth it noise wise (and the glare from the wife). That resulted me getting on the shuttle with 30 mile range, but upon starting up to leave dropped to zero range... que a slow drive to the nearest Shell.

Here's my data for my drive back home: 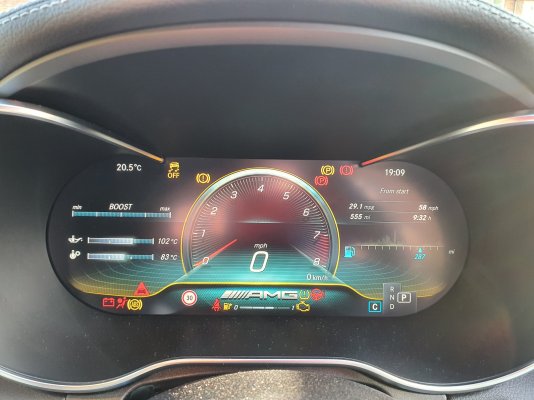 I probably did around 1,300 miles in total, one trip was to a local car show, where I got to see a range of old aggressive looking Alpine cars and a few "classic" MGFs. That made me feel old, as my father had one when I got my MR2.

p.s. I wish we had roads like those I used in Brittany here in the UK - smooth, fairly clear and zero car rattles, it was like a dream!
C

has anyone tried it with roof box on?
G

New bypass opened where I live which is 50mph limit so not as much stop start to & from work.
Consumption now around 25mpg up for 20mpg before.
C

Blimey, that is small for a big car with a big engine.

Its is very small considering the mpg.....my little Alfa diesel has a 70 litre tank....I often get around 700 miles to a tank on my commute and closer to 775 on a long holiday run.

I think all c class AMGS have a 60L tank

Spider10 said:
I think all c class AMGS have a 60L tank

200 hundred mile plus round trip this am, a mixture of B, A and motorway miles (mostly) in Comfort mode with a 10mile stretch of S+ mode and 28.6mpg on the dash. Comfort, easy pace, no rattles or sqeaks. Thats about the same as my old Lexus ISF and that car had 417bhp and weighed about 100kgs less.
Satisfying to know that you have made a good choice when buying a car. Only downside was the P Zeros noise on that crap bit of the M25 from Reigate upto the M3 turnoff.

A fair bit of mine used to fall out of the car before I got to burn it! 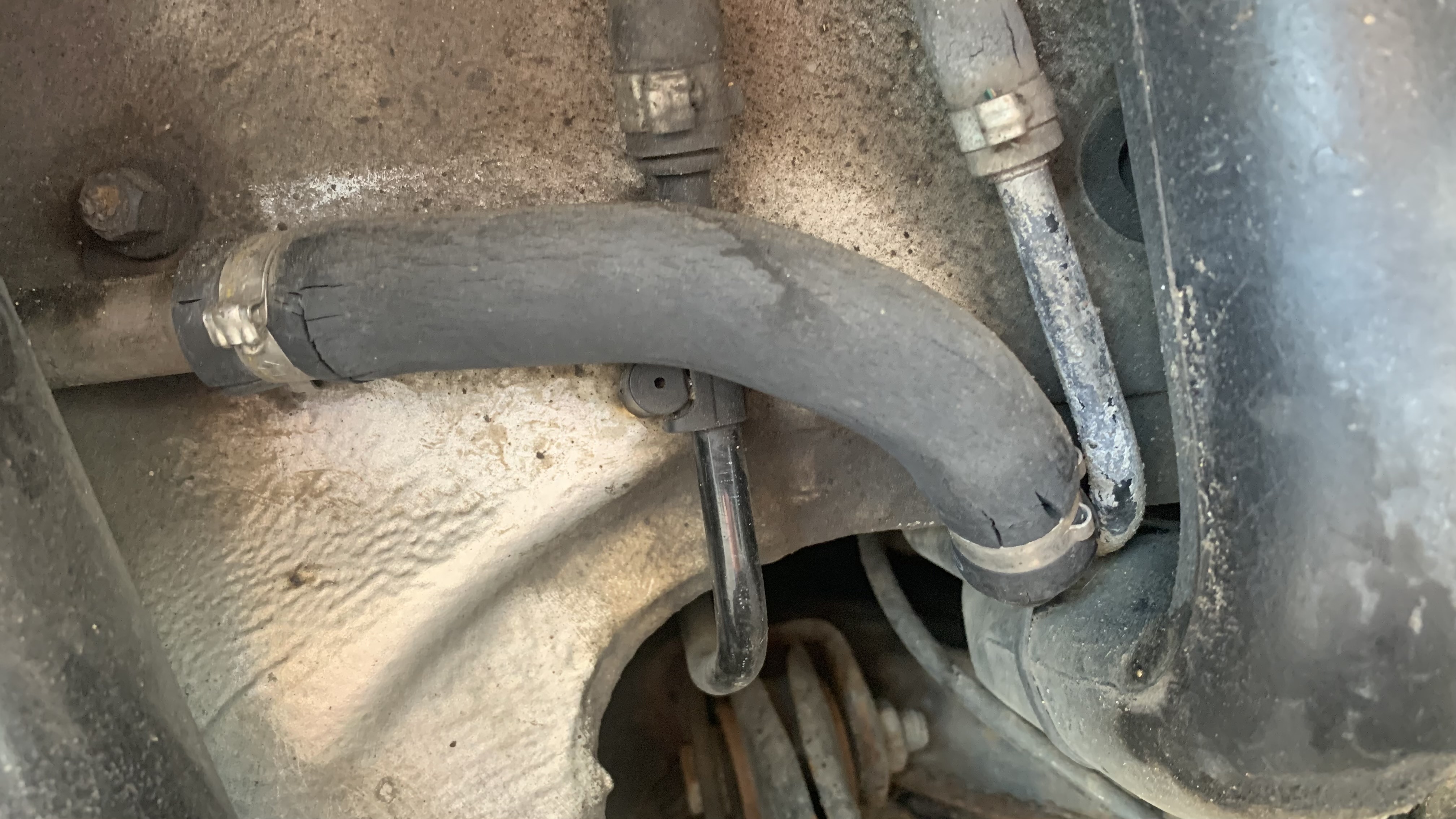 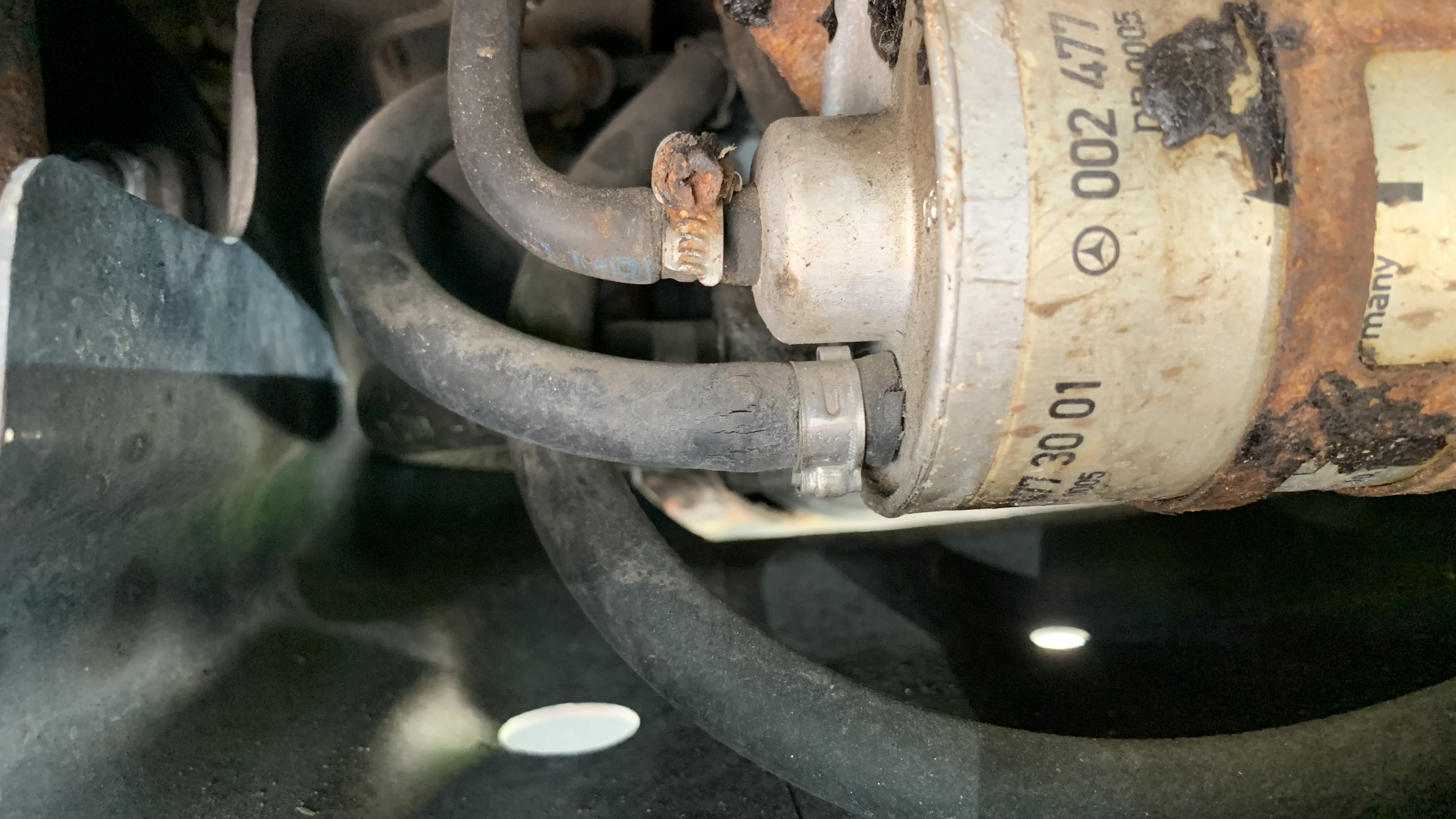 These have all been refreshed now. I get about 20mpg but I only have the small (gets lighter daily probably) AMG .
You must log in or register to reply here.